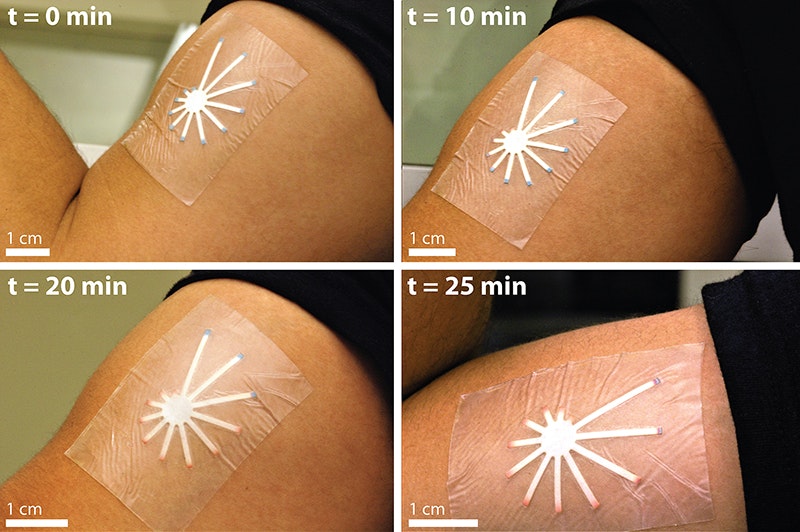 Researchers have developed a low-cost skin patch that changes color to indicate different levels of hydration, representing a potential new medical technology.
Such an innovation might be used by marathon runners, military personnel and others to help prevent dehydration.
"Hydration in humans is a delicate parameter," said Babak Ziaie, a professor of biomedical engineering and electrical and computer engineering at Purdue University. "Even small deviations such as 2 percent from normal levels can affect a person's cognitive and physical performance by more than 30 percent."
The palm-size patch consists of filter paper that is laser-machined to create a radial array of strips, which are laminated with a water-impermeable film to form microchannels. The channels are loaded with a water-activated dye at one end. As sweat secretion increases, the strips are activated sequentially, changing from blue to red and providing easily identifiable levels of moisture loss.
"We have talked to many experts including marathon directors, the Ironman World Championship, Olympic triathlon athletes and many collegiate and professional coaches, athletes, race directors and EMTs to validate the need for this kind of product," said graduate student Vaibhav Jain. "Also, two industrial companies have shown interest in our technology, and we are in talks with them."
Conventional methods for monitoring hydration are either invasive, require non-portable equipment or do not yield results immediately.
"In comparison, our approach is a fast, user-friendly dermal patch for collecting and measuring sweat secretion," Ziaie said. "And our fabrication process could be scaled up to large-volume manufacturing."
The patch was tested at a sweating rate of 90 microliters per hour over a square centimeter of skin, which corresponds to normal human sweat rates.
The researchers have filed a patent application for the concept through the Office of Technology Commercialization of the Purdue Research Foundation.
Source and top image: Purdue University
Learn more at the next leading event on the topic: Healthcare Sensor Innovations USA 2020