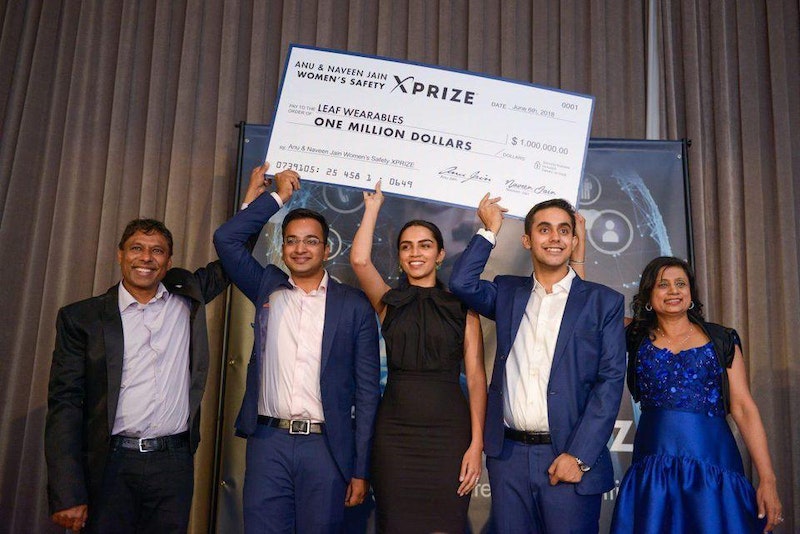 Leaf Wearables- an Indian startup which raised $250,000 in 2016 to launch their first product SAFER- A Smart Pendant for Women Safety, has now won $ 1 million Anu and Naveen Jain Women's Safety XPRIZE. The Grand Prize Winner Announcement and Award Ceremony happened in New York City at the United Nations Headquarters. For more information see the IDTechEx report on wearable technology 2018-2028.
An XPRIZE is a highly leveraged, incentivized prize competition that pushes the limits of what's possible to change the world for the better. The XPRIZE Board Members include Ratan Tata, Larry Page, Naveen and Anu Jain, Amir Ansari, Jack Bader and the company is led by Peter H Diamandis.
Founded by the students of IIT Delhi and Delhi Technological University, the team started working on their first product "SAFER Smart Jewellery" back in 2015 when they made a smart pendant which women can double press to send SOS alerts to their loved ones. The product was launched in 2016 and went on to become one of the best selling wearable technology product in India. SAFER was among top 10 innovators who were also a part of PM Narendra Modi's delegation to Silicon Valley in 2015 and has also won multiple awards in countries like Singapore and UAE for their work on this problem.
For the Women's Safety XPRIZE, the team had developed a new technology called SAFER PRO which incorporates all their learnings of previous versions in terms of robust communication, precise location accuracy and audio streaming during the attack. Apart from that SAFER team is also working on last mile connectivity of help as well.
"Winning XPrize is a great deal in our mission to make this world a safer place. We will now have the support of global tech influencers and the close knit community of xprize." said Avinash Bansal, cofounder of SAFER
"XPRIZE as a platform gives us huge opportunity to showcase the growth and development of innovation and technology in our country. The problem of women safety is all over the world and being situated in New Delhi we know the problem in and out. We are hoping that with XPRIZE credibility India will be looked as a hub of innovation and where technology companies don't only build product but thrive. " added Manik Mehta, cofounder of SAFER.
SAFER was the only Indian Team among the finalists. With the recent horror of Kathua Rape Case sending shivers down the spine of more than a billion Indians, it is the need of the hour that Innovators across the world work to solve this huge problem of women safety and SAFER seems to be on the right track.
Source and top image: Leaf Wearables
Learn more at the next leading event on the topic: Healthcare Sensor Innovations USA 2020