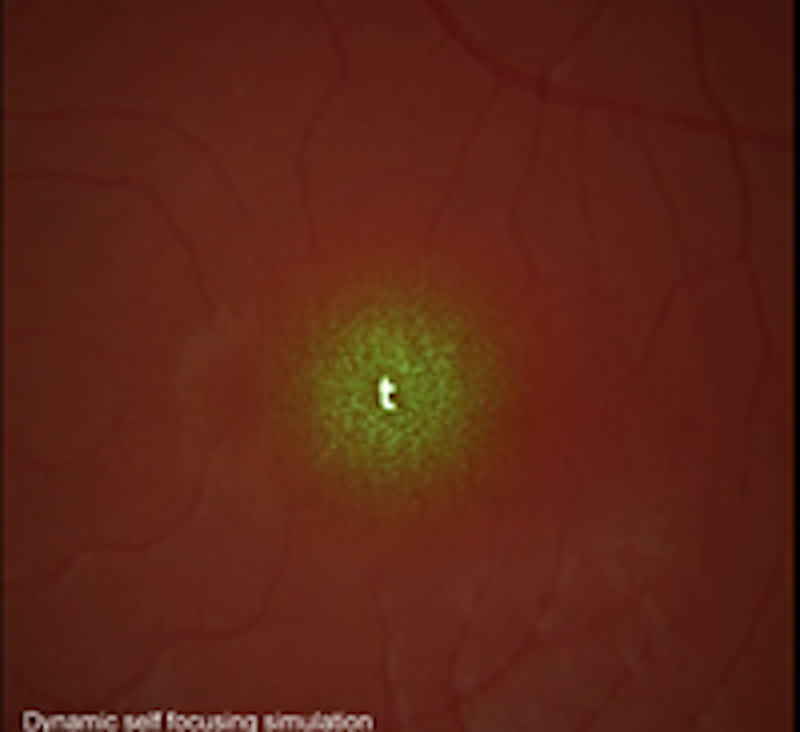 Researchers have developed a fundamentally new approach to a see-through display for augmented reality, or smart glasses. By projecting images from the glass directly onto the eye, the new design could one day make it possible for a user to see information such as directions or restaurant ratings while wearing a device almost indistinguishable from traditional glasses. For more information see the IDTechEx report on Augmented, Mixed and Virtual Reality 2017-2027.
"Rather than starting with a display technology and trying to make it as small as possible, we started with the idea that smart glasses should look and feel like normal glasses," said research team leader Christopher Martinez of the Laboratoire d'électronique des technologies de l'information (Leti) in France. "Developing our concept required a great deal of imagination because we eliminated the bulky optical components typically required and instead use the eye itself to form the image."
In Optica, The Optical Society's journal for high-impact research, the authors detail their new retinal projection display concept and report positive results from initial optical simulations. Although glasses using this new approach wouldn't be useful for showing videos, they could provide information in the form of text or simple icons.
"Although we are focused on augmented reality applications, the new display concept may also be useful for people with vision problems," said Martinez. "The disturbance present in the eye could be integrated into the projection, giving visually impaired people a way to see information such as text."
Forming an image in the eye
The unconventional display design rapidly projects individual pixels, which the brain puts together to form letters and words. "We don't bring an image to the surface of the glass, but instead bring information that is emitted in the form of photons to make the image in the eye," explained Martinez.
According to the design concept this feat would be accomplished by sending photons from a laser or other light source through a light-guiding component into a holographic optical element created within the lens of the glasses. Holographic optical elements that are significantly smaller than their traditional counterparts can be made in light-sensitive plastics using the same laser light interactions that make holograms such as those that protect credit cards from forgery.
For the concept to work, it is critical that all the projected photons have synchronized phases and match in coherence. Otherwise, a noisy image is formed, akin to what you would hear if the members of a choral group were singing the same song but starting and stopping at different times. The researchers used the holographic element to synchronize the phase, like a cue that helps the singers start at the same moment.
"It is very complicated to use traditional methods such as a mask with an optical structure to adjust the phase of photon emitters that are separated from each other by just hundreds of microns," said Martinez. "Our design uses a unique holographic element to synchronize the photons by matching the phase with a reference beam."
The design also includes a grid of lightguides that makes the photons coherent, akin to making sure the singers all sing at the same speed. This component was made using an integrated photonics approach that incorporates the same semiconductor fabrication techniques used to make computer chips and fabricate optical components in silicon.
The researchers say that their display concept is an important example of the new opportunities for retinal projection that will now be possible thanks to recent developments in integrated photonics, which have moved from applications using telecommunication wavelengths into visible wavelengths that can be used in displays.
Seeing outside the box
Because of the limited space available in glasses' lenses, the first prototype will likely have a resolution of 300 by 300 pixels, which the researchers say could be improved by stacking two displays on top of each other. Importantly, the design enables completely new ways to use the pixels available, which are not constrained to a square shape like traditional displays.
"Using a holographic element to form a retinal display is quite different from the traditional grid of pixels used for traditional displays," said Martinez. "For example, information could be projected to the left and right portions of the field of view with no information in between, without increasing the complexity of the display."
A detailed optical simulation of the new design validated the new approach and revealed that a clearer image would be created if the points where light is emitted were arranged randomly rather than with a periodic pattern. The researchers are now figuring out how to best accomplish this random arrangement. They also point out that although the device should be safe because very little light will be needed to form the image on the eye, safety studies will be needed as development progresses.
The researchers plan to make and test the individual components before creating a working prototype. The first prototype will display static monochromatic images, but the researchers are confident that the retinal projection approach can be used for a dynamic multi-color display.
Source and top image: The Optical Society
Learn more at the next leading event on the topic: Healthcare Sensor Innovations USA 2020