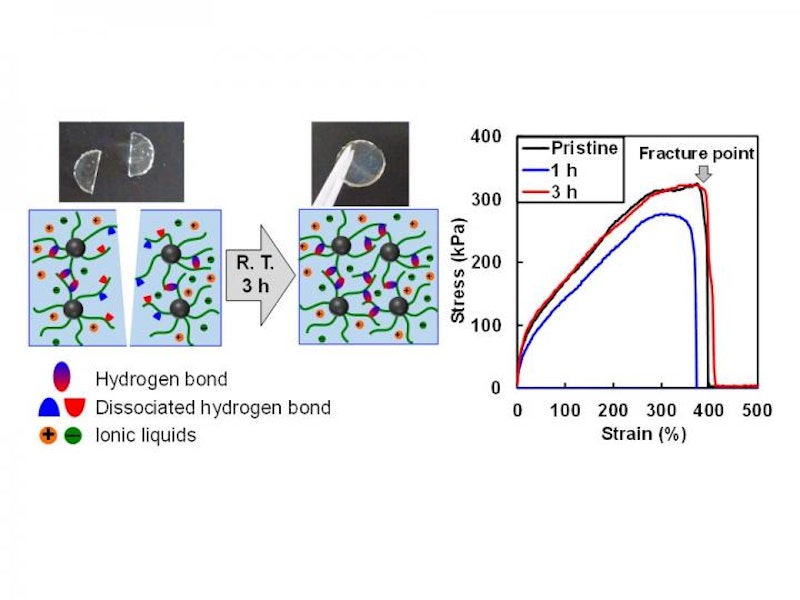 Scientists at Yokohama National University and the University of Tokyo in Japan have designed an ion gel with excellent toughness and an ability to self-heal at ambient temperature without any external trigger or detectable change in the environment such as light or temperature. This new class of material has promising potential for building flexible electronic devices. For more information see the IDTechEx report on Functional Materials for Future Electronics.
Ion gels have attracted much attention due to their unique properties such as low tendency to evaporate at room temperature, high thermal stability and a high ionic conductivity. The researchers demonstrated an ion gel that quickly heals on its own without any external stimuli at room temperature. They also demonstrate the material's excellent toughness resulting from multiple hydrogen bonds within the material.
"Wearable electronic devices are expected to be stretched and bent many times during daily use," said Ryota Tamate, a corresponding author and a JSPS postdoctoral researcher at the Graduate School of Engineering, Yokohama National University. "If the ion gel used in the wearable device has a self-healing property, it may fix cracks and damages during the repeated stretching and bending, and improve the device's durability."
The study, published in Advanced Materials in July of 2018, describes a specific type of polymer gel, called the ion gel, that is filled with salts in liquid form, or ionic liquids. This ion gel was created by combining two materials, or "blocks" -- one is repelled by ionic liquids while the other bonds with hydrogen. Together, they form what is called a diblock copolymer. The combination of the liquid salts and the diblock copolymer material resulted in a final micellar structure that is responsible for all of the material's desirable qualities. The block that is repelled by ionic liquids makes up the core, while the outside is composed of chains that interact with one another via multiple hydrogen bonds.
The study is the first demonstration that the introduction of hydrogen bonding into ion gels can result in the material's strength as well as its ability to self-heal at room temperature.
"The self-healing process of this ion gel can be completed as quickly as within a few hours," Tamate said. "Hydrogen bonding is reversible, and as a result, it is a promising interaction that contributes to a material's ability to self-heal due to their reversible nature. In this study, by tuning the hydrogen bonding strength of polymer chains in ionic liquids, we utilized hydrogen bonding as a reversible cross-linking point of the ion gel. Furthermore, we proved that the micellar structure formed by the diblock copolymer material significantly improved the physical strength and self-standing ability of the ion gel," he added.
While several types of tough ion gels have been reported so far, the authors write that achieving both self-healing ability as well as high toughness remains a great challenge. They also report that their gel's mechanical and electrochemical properties were similar to those of an otherwise unaltered or unchanged ion gel. The material's self-standing ability, the fact that it can self-heal at room temperature as well as easily processed in solution all make it a promising solid electrolyte for future applications in the area of flexible electronics - in particular to create self-healing electronics.
According to Tamate, "For device applications, durability of the ion gel under various physically straining conditions should be quantitatively investigated. In addition, as the present diblock copolymer tends to absorb moisture from the air, we would like to seek other interactions between structures composed of several molecules that are stable in an open atmosphere for a long time. In addition, as physical properties of ionic liquids can be widely tuned by selection of cations and anions, the combination with different ionic liquids will be investigated."
Ultimately, the authors would like to develop new functional ion gels that can be used to create new devices that are flexible and thus wearable.
Source and top image: Yokohama National University
Learn more at the next leading event on the topic: Healthcare Sensor Innovations USA 2020