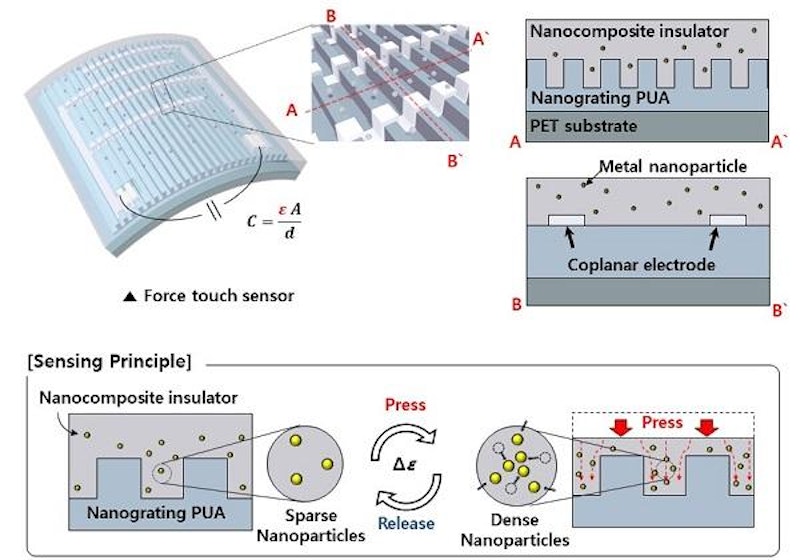 Researchers at The Korea Advanced Institute of Science and Technology have reported a high-performance and transparent nanoforce touch sensor by developing a thin, flexible, and transparent hierarchical nanocomposite (HNC) film. The research team says their sensor simultaneously features all the necessary characters for industrial-grade application: high sensitivity, transparency, bending insensitivity, and manufacturability. For more information see the IDTechEx reports on Wearable Sensors 2018-2028 and Printed and Flexible Sensors 2017-2027.
Force touch sensors that recognize the location and pressure of external stimuli have received considerable attention for various applications, such as wearable devices, flexible displays, and humanoid robots. For decades, huge amounts of research and development have been devoted to improving pressure sensitivity to realize industrial-grade sensing devices. However, it remains a challenge to apply force touch sensors in flexible applications because sensing performance is subject to change and degraded by induced mechanical stress and deformation when the device is bent.
To overcome these issues, the research team focused on the development of non-air gap sensors to break away from the conventional technology where force touch sensors need to have air-gaps between electrodes for high sensitivity and flexibility.
The proposed non air-gap force touch sensor is based on a transparent nanocomposite insulator containing metal nanoparticles which can maximize the capacitance change in dielectrics according to the pressure, and a nanograting substrate which can increase transparency as well as sensitivity by concentrating pressure. As a result, the team succeeded in fabricating a highly sensitive, transparent, flexible force touch sensor that is mechanically stable against repetitive pressure.
Furthermore, by placing the sensing electrodes on the same plane as the neutral plane, the force touch sensor can operate, even when bending to the radius of the ballpoint pen, without changes in performance levels.
The proposed force touch has also satisfied commercial considerations in mass production such as large-area uniformity, production reproducibility, and reliability according to temperature and long-term use.
Finally, the research team applied the developed sensor to a pulse-monitoring capable healthcare wearable device and detected a real-time human pulse. In addition, the research team confirmed with HiDeep, Inc. that a seven-inch large-area sensor can be integrated into a commercial smartphone.
Source and top image: Korea Advanced Institute of Science and Technology
Learn more at the next leading event on the topic: Healthcare Sensor Innovations USA 2020