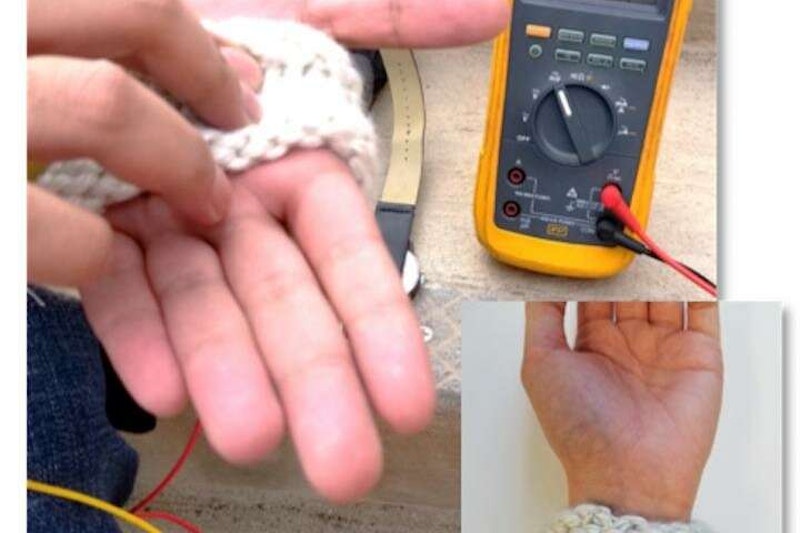 Many wearable biosensors, data transmitters and similar tech advances for personalized health monitoring have now been "creatively miniaturized," says materials chemist Trisha Andrew at the University of Massachusetts Amherst, but they require a lot of energy, and power sources can be bulky and heavy. Now she and her Ph.D. student Linden Allison report that they have developed a fabric that can harvest body heat to power small wearable microelectronics such as activity trackers. For more information see the IDTechEx report on E-Textiles 2018-2028.
Writing in an early online edition of Advanced Materials Technologies, Andrew and Allison explain that in theory, body heat can produce power by taking advantage of the difference between body temperature and ambient cooler air, a "thermoelectric" effect. Materials with high electrical conductivity and low thermal conductivity can move electrical charge from a warm region toward a cooler one in this way.
Some research has shown that small amounts of power can be harvested from a human body over an eight-hour workday, but the special materials needed at present are either very expensive, toxic or inefficient, they point out. Andrew says, "What we have developed is a way to inexpensively vapor-print biocompatible, flexible and lightweight polymer films made of everyday, abundant materials onto cotton fabrics that have high enough thermoelectric properties to yield fairly high thermal voltage, enough to power a small device."
For this work, the researchers took advantage of the naturally low heat transport properties of wool and cotton to create thermoelectric garments that can maintain a temperature gradient across an electronic device known as a thermopile, which converts heat to electrical energy even over long periods of continuous wear. This is a practical consideration to insure that the conductive material is going to be electrically, mechanically and thermally stable over time, Andrew notes.
"Essentially, we capitalized on the basic insulating property of fabrics to solve a long-standing problem in the device community," she and Allison summarize. "We believe this work will be interesting to device engineers who seek to explore new energy sources for wearable electronics and designers interested in creating smart garments."
Specifically, they created their all-fabric thermopile by vapor-printing a conducing polymer known as persistently p-doped poly(3,4-ethylenedioxythiophene) (PEDOT-Cl) onto one tight-weave and one medium-weave form of commercial cotton fabric. They then integrated this thermopile into a specially designed, wearable band that generates thermo-voltages greater than 20 milliVolts when worn on the hand.
The researchers tested the durability of the PEDOT-CI coating by rubbing or laundering coated fabrics in warm water and assessing performance by scanning electron micrograph, which showed that the coating "did not crack, delaminate or mechanically wash away upon being laundered or abraded, confirming the mechanical ruggedness of the vapor-printed PEDOT-CI."
They measured the surface electrical conductivity of the coatings using a custom-built probe and found that the looser weave cotton demonstrated higher conductivity than the tighter weave material. The conductivities of both fabrics "remained largely unchanged after rubbing and laundering," they add.
Using a thermal camera, they established that the wrist, palm and upper arms of volunteers radiated the most heat, so Andrew and Allison produced stretchy knitted bands of thermoelectric fabric that can be worn in these areas. The air-exposed outer side of the band is insulated from body heat by yarn thickness, while only the uncoated side of the thermopile contacts the skin to reduce the risk of allergic reaction to PEDOT-CI, they point out.
The researchers note that perspiration significantly increased the thermovoltage output of the stretchy armband, which was not surprising, as damp cotton is known to be a better heat conductor than dry fabrics, they observe. They were able to turn off heat transfer at will by inserting a heat-reflective plastic layer between the wearer's skin and the band, as well.
Overall, they say, "We show that the reactive vapor coating process creates mechanically-rugged fabric thermopiles" with "notably-high thermoelectric power factors" at low temperature differentials compared to traditionally produced devices. "Further, we describe best practices for naturally integrating thermopiles into garments, which allow for significant temperature gradients to be maintained across the thermopile despite continuous wear."
Source and top image: University of Massachusetts Amherst
Learn more at the next leading event on the topic: Healthcare Sensor Innovations USA 2020