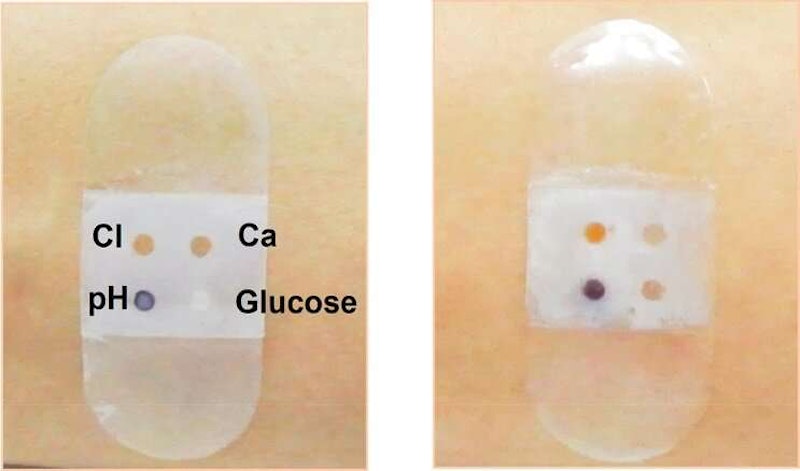 Like other biofluids, sweat contains a wealth of information about what's going on inside the body. However, collecting the fluid for analysis, usually by dripping or absorbing it from the skin's surface, can be time-consuming and messy. Now, researchers have developed a bandage-like biosensor that both collects and -- in conjunction with a smart phone -- analyzes sweat. The device, which could someday help diagnose diseases, is reported in ACS' journal Analytical Chemistry. For more information see the IDTechEx report on Wearable Sensors 2018-2028.
Compared with other biofluids such as blood, sweat has the potential to be obtained less invasively for diagnostic testing. Researchers have developed tools to collect and analyze sweat, such as temporary tattoos or microfluidic devices, but they typically require wires, electronics or sophisticated structures. Tailin Xu, Li-Ping Xu, Xueji Zhang and colleagues wanted to make a wearable biosensor resembling a bandage that samples sweat and uses a simple color-changing assay to quantify various components.
To make their device, the researchers coated a flexible polyester film with a super-hydrophobic silica suspension. They then etched microwells into the silica layer to collect perspiration. At the bottom of the wells, they placed dyes that change color with pH or concentration of chloride, glucose or calcium. The team added an adhesive backing and attached the biosensor bandage onto a volunteer's skin. When the person exercised, their perspiration collected in the microwells, and the spots changed colors. By imaging and analyzing the colors with a cell phone, the researchers determined that the sweat pH was 6.5-7.0, with a chloride concentration of about 100 mM and trace amounts of calcium and glucose. The researchers are now working on increasing the sensitivity of the device.
The authors acknowledge funding from the National Natural Science Foundation of China, Beijing Natural Science Foundation, Fundamental Research Funds for Central Universities, National Postdoctoral Innovative Talents Support Program of China, Program for Guangdong Introducing Innovative and Entrepreneurial Teams and the Shenzhen Fundamental Research Program.
Source and top image: American Chemical Society