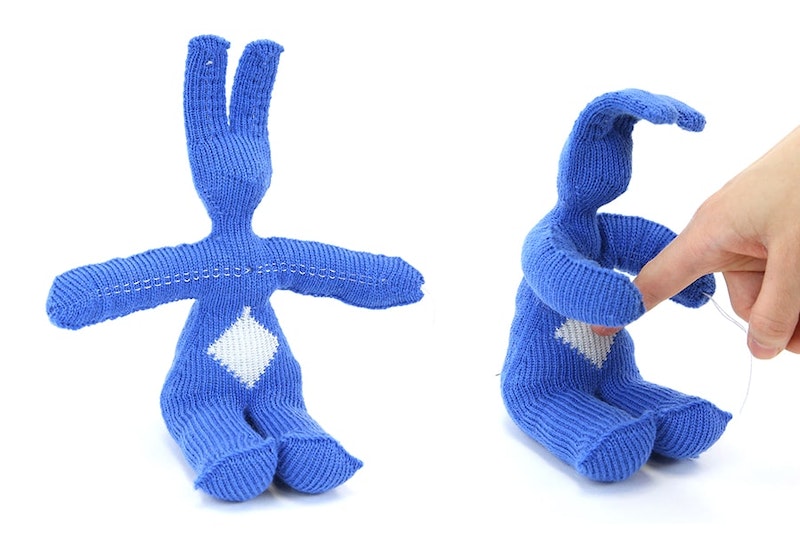 Carnegie Mellon University researchers have used computationally controlled knitting machines to create plush toys and other knitted objects that are actuated by tendons. It's an approach they say might someday be used to cost-effectively make soft robots and wearable technologies. For more information see the IDTechEx reports on New Robotics and Drones 2018-2038 and Haptics 2018-2028.
Software developed by researchers from CMU's Morphing Matter Lab and Dev Lab in the Human-Computer Interaction Institute makes it possible for the objects to emerge from the knitting machines in their desired shapes and with tendons already embedded. They can then be stuffed and the tendons attached to motors, as necessary.
Lea Albaugh, a Ph.D. student who led the research effort, developed the tendon-embedding technique and explored this design space to make lampshades that change shape, stuffed figures that give hugs when poked in the stomach and even a sweater with a sleeve that moves on its own. Although largely fanciful, these objects demonstrate capabilities that could eventually have serious applications, such as soft robots.
"Soft robotics is a growing field," Albaugh noted. "The idea is to build robots from materials that are inherently safe for people to be near, so it would be very hard to hurt someone. Actuated soft components would be cheap to produce on commercial knitting machines. We have so many soft objects in our lives and many of them could be made interactive with this technology," she added. "A garment could be part of your personal information system. Your sweater, for example, might tap you on your shoulder to get your attention. The fabric of a chair might serve as a haptic interface. Backpacks might open themselves."
Commercial knitting machines are well developed and widely used, but generally require painstaking programming for each garment. This new research builds on previous CMU work to automate the process, making it easier to use these mass production machines to produce customized and one-off designs.
"It's a pretty convenient pipeline to use for producing actuated knitted objects," said Yao, assistant professor in HCII. Other researchers have experimented with actuated textile objects, she noted, but have been faced with the time-consuming task of adding tendons to completed items.
Embedding tendons in the materials as they are created saves time and effort, and adds precision to the actuation.
The researchers developed methods for embedding tendon paths horizontally, vertically and diagonally in fabric sheets and tubes. They showed that the shape of the fabric, combined with the orientation of the tendon path, can produce a variety of motion effects. These include asymmetric bends, S-shaped bends and twists. Stiffness of the objects can be adjusted by stuffing them with various materials, such as those available to hobbyists.
A number of tendon materials can be used, including polyester-wrapped quilting thread, pure silk yarn and nylon monofilament.
In addition to actuating the objects, these techniques also can add sensing capabilities to objects. By attaching sensors to each tendon, for instance, it's possible to sense the direction in which the object is being bent or twisted. By knitting with conductive yarn, researchers showed they could create both contact pads for capacitive touch sensing and strain sensors to detect if a swatch is stretched.
3D printing already is being used to make customized, actuated objects and robotic components, Albaugh said, although the materials often are hard. Computationally controlled knitting has the potential for expanding the possibilities and making the results more people-friendly.
"I think there's enormous power in using materials that people already associate with comfort," she said.
Source and top image: Carnegie Mellon University

Right, we can use number of various materials for including polyester-wrapped quilting thread, pure silk yarn & more. I also learnt about creative promotional toys to promote your brands and increase visibility of your business. I think you should check as well.