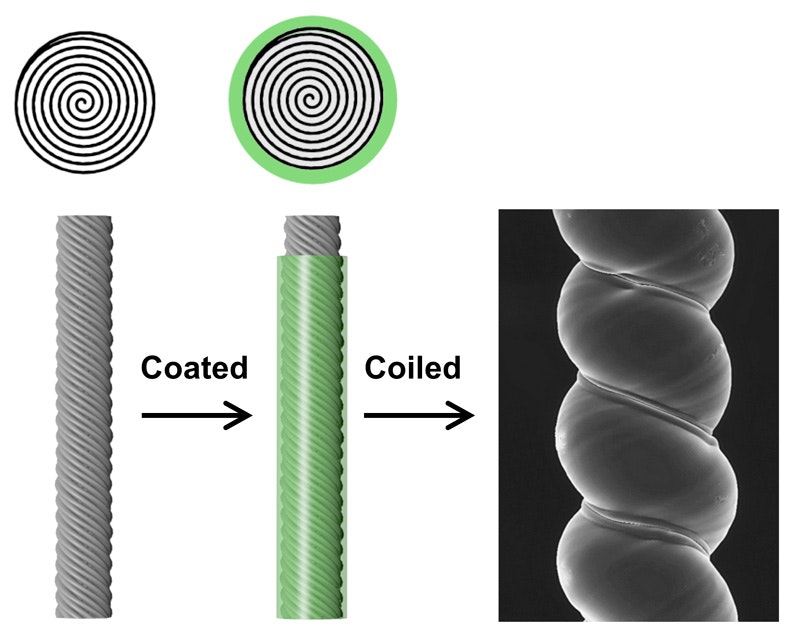 Over the last 15 years, researchers at The University of Texas at Dallas and their international colleagues have invented several types of strong, powerful artificial muscles using materials ranging from high-tech carbon nanotubes (CNTs) to ordinary fishing line. In a new study published in the journal Science, the researchers describe their latest advance, called sheath-run artificial muscles, or SRAMs. For more information see the IDTechEx report on Graphene, 2D Materials and Carbon Nanotubes: Markets, Technologies and Opportunities 2019-2029.
The research group's previous muscles were made by twisting CNT yarn, polymer fishing line or nylon sewing thread. By twisting these fibers to the point that they coil, the researchers produced muscles that dramatically contract, or actuate, along their length when heated and return to their initial length when cooled. To form the new muscles, the research team applied a polymer coating to twisted CNT yarns, as well as to inexpensive nylon, silk and bamboo yarns, creating a sheath around the yarn core.
"In our new muscles, it is the sheath around a coiled or twisted yarn that drives actuation and provides much higher work-per-cycle and power densities than for our previous muscles," said Dr. Ray Baughman, corresponding author of the study, the Robert A. Welch Distinguished Chair in Chemistry and director of the Alan G. MacDiarmid NanoTech Institute at UT Dallas. In their experiments, a key step to making the finished muscles was to twist the newly coated yarns until they coil, while the sheath material was still wet.
"If you insert twisting or coiling after the sheath has dried, the sheath will crack," Baughman said. "Optimizing the thickness of the sheath is also very important. If it is too thick, the twisted yarn at the core won't be able to untwist because the sheath is holding it in place. If it is too thin, the untwisting of the yarn will cause the sheath to crack." Dr. Jiuke Mu, lead author of the study and a research scientist with the NanoTech Institute, first developed the concept of the sheath-run artificial muscle. In the sheath-run configuration, the outside sheath absorbs energy and drives the actuation of the muscle.
"In our previous twisted and coiled muscles, we applied thermal energy to the entire muscle, but only the outer, twisted part of the fiber was doing any mechanical work — the central part was doing little," Mu said. "Using the sheath, the input energy can be converted into the mechanical energy of the muscle more quickly and efficiently. Why consume energy by heating the whole yarn, when all you need is to heat the outer part of the yarn for it to actuate? With our new muscles, we only have to put energy into the sheath."
Baughman said many materials could be used for the sheath, as long as they have the strength and can undergo dimensional change under various ambient variables, such as changes in temperature or moisture. When operated electrochemically, a muscle consisting of a CNT sheath and a nylon core generated an average contractile power that is 40 times that of human muscle and nine times that of the highest power alternative electrochemical muscle.
"In our previous work, we showed that yarns made from carbon nanotubes make wonderful artificial muscles. Such yarns are lightweight, yet are stronger and more powerful than human muscles of the same length and weight," Baughman said. "But carbon nanotube yarn is very expensive, so in this new work, we're going in a different direction," he said. "We found that while we can use carbon nanotubes as the core material for sheath-run artificial muscles, we don't have to. We demonstrated that CNT yarns can be replaced by inexpensive, commercially available yarns." He added that the polymer coating process could easily be scaled up for commercial production.
"Since the SRAM technology enables the replacement of CNT yarns with cheaper yarns, these muscles are very attractive for intelligent structures, such as robotics and comfort-adjusting clothing," Baughman said. For more information see the IDTechEx report on New Robotics and Drones 2018-2038: Technologies, Forecasts, Players.
To demonstrate possible consumer applications of sheath-run artificial muscles, the researchers knitted SRAMs into a textile that increased porosity when exposed to moisture. They also demonstrated a SRAM made from polymer-coated nylon thread that linearly contracts when exposed to increasing glucose concentration. This muscle might be used to squeeze a pouch to release medication to counteract high blood sugar.
The inventors have applied for a provisional U.S. patent on the technology.
Source and top image: University of Texas at Dallas
Learn more at the next leading event on the topic: Healthcare Sensor Innovations USA 2020