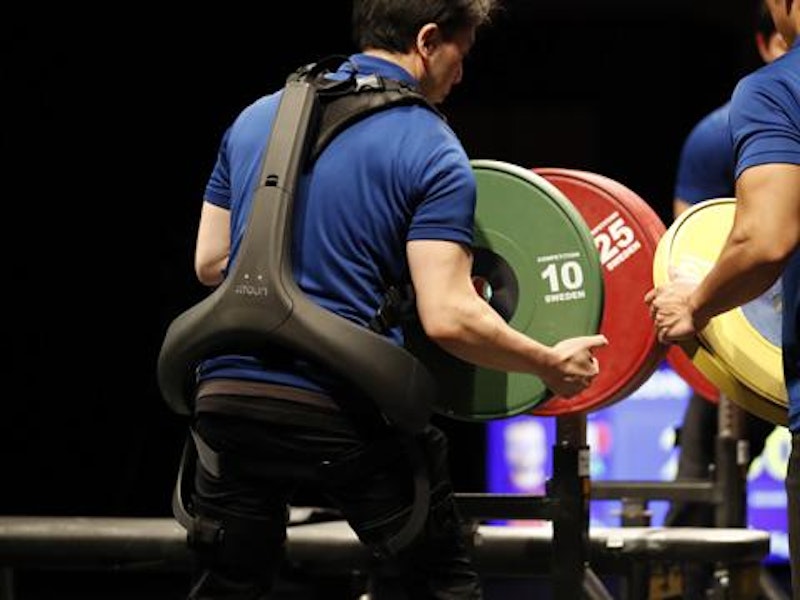 Panasonic Corporation, an Official Worldwide Paralympic Partner, announced that it would provide its Power Assist Suit for use at World Para Powerlifting (WPPO) events and the Tokyo 2020 Paralympic Games. For more information see the IDTechEx report on Wearable Technology Forecasts 2019-2029.
The suits will be worn by spotter/loader personnel tasked with moving weights and spotting lifters during the competition. The suits feature built-in sensors that detect limb movements and motors synchronized to provide wearers with mechanized power for performing strenuous tasks easily and safely. ATOUN MODEL Y, the Power Assist Suit model chosen for the event, reduces stress on the user's waist when lifting or lowering objects from the floor to waist height. The suit was originally designed to support personnel who frequently handle heavy loads, including at airports, factories and logistics, construction or agricultural sites.
Para powerlifting is a bench-press competition for athletes with disabilities in their lower limbs. Competitions are organized into 10 weight classes ranging from 49 kg to 107+ kg for men and 41 kg to 86+ kg for women. In large tournaments, it is not unusual for each spotter/loader to handle more than 100 weights of between 10 kg and 50 kg.
The Panasonic ATOUN-model Power Assist Suit has been successfully demonstrated at the Kitakyushu 2018 Asia-Oceania World Para Powerlifting Championships and Kitakyushu 2017 Para Powerlifting Japan Cup, both WPPO-sanctioned competitions. Such demonstrations have showcased the suit's many advantages, including:
World Para Powerlifting, under the governance of the International Paralympic Committee, is the international federation for the sport and is based in Bonn, Germany. Open to male and female athletes with eight eligible physical impairments, Para powerlifting athletes compete in one sport class across 10 different weight categories per gender. Major competitions include the Paralympic Games, biennial World Championships, triennial regional Championships and annual World Cup and Grand Prix events.
World Para Powerlifting events are ultimate tests of upper body strength in which athletes must sometimes lift more than three times their own body weights. During World Para Powerlifting competitions, loader/spotters will support the competition by handling weights for more than 180 powerlifters. It is estimated that these assistants will cumulatively handle more 8,650 kg of weight during the male and female competitions combined. Panasonic's ATOUN MODEL Y Power Assist Suit, a wearable robotic suit weighing just 4.5 kg, will alleviate stress placed on the waists and backs of loader/spotters as they repeatedly handle weights. When a heavy weight is lifted, body-position sensors detect torso movements and trigger the operation of built-in motors that are synchronized with the person's movements to reduce waist stress by compensating for the average motor action potential of the wearer's muscles.
Source and top image: Panasonic
Learn more at the next leading event on the topic: Wearable Europe 2020