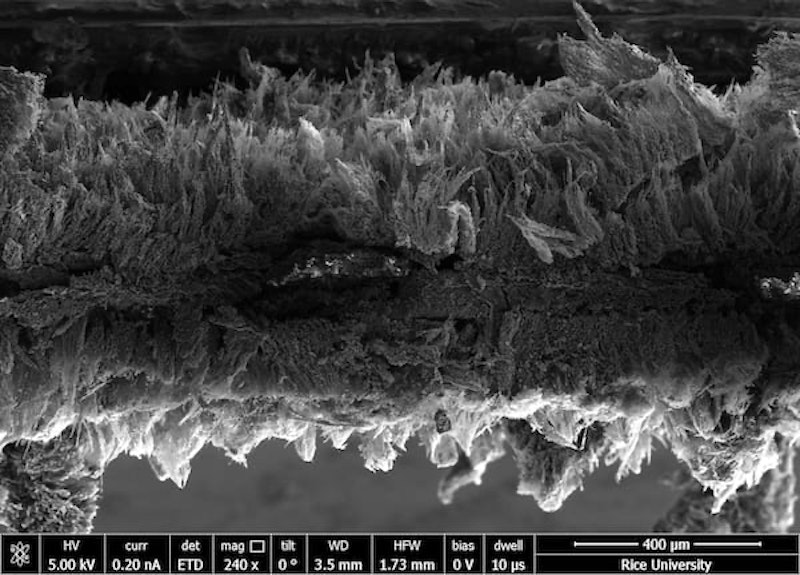 Airborne bacteria may see what looks like a comfy shag carpet on which to settle. But it's a trap. Rice University scientists have transformed their laser-induced graphene (LIG) into self-sterilizing filters that grab pathogens out of the air and kill them with small pulses of electricity. For more information see the IDTechEx report on Graphene, 2D Materials and Carbon Nanotubes: Markets, Technologies and Opportunities 2019-2029.
The flexible filter developed by the Rice lab of chemist James Tour may be of special interest to hospitals. According to the Centers for Disease Control and Prevention, patients have a 1-in-31 chance of acquiring a potentially antibiotic-resistant infection during hospitalization.
The device described in the American Chemical Society journal ACS Nano captures bacteria, fungi, spores, prions, endotoxins and other biological contaminants carried by droplets, aerosols and particulate matter.
The filter then prevents the microbes and other contaminants from proliferating by periodically heating up to 350 degrees Celsius (662 degrees Fahrenheit), enough to obliterate pathogens and their toxic byproducts. The filter requires little power, and heats and cools within seconds.
LIG is a conductive foam of pure, atomically thin carbon sheets synthesized through heating the surface of a common polyimide sheet with an industrial laser cutter. The process discovered by Tour's lab in 2014 has led to a range of applications for electronics, triboelectric nanogenerators, composites, electrocatalysis and even art.
Adapting it for use as a filter meant laser-building graphene into both sides of the polyimide, leaving a fine, three-dimensional lattice of the polymer to reinforce the graphene foam. Laser-building at different temperatures resulted in a thick forest of graphene fibers with smaller, interconnected sheets underneath.
Like all pure graphene, the foam conducts electricity. When electrified, Joule heating raises the filter's temperature above 300 C, enough to not only kill trapped pathogens but also to decompose toxic byproducts that can feed new microorganisms and activate the human immune system. The researchers suggested a single, custom-fit LIG filter could be efficient enough to replace the two filter beds currently required by federal standards for hospital ventilation systems.
"So many patients become infected by bacteria and their metabolic products, which for example can result in sepsis while in the hospital," Tour said. "We need more methods to combat the airborne transfer of not just bacteria but also their downstream products, which can cause severe reactions among patients. Some of these products, like endotoxins, need to be exposed to temperatures of 300 degrees Celsius in order to deactivate them," a purpose served by the LIG filter, he said. "This could significantly lessen the transfer of bacteria-generated molecules between patients, and thereby lower the ultimate costs of patient stays and lessen sickness and death from these pathogens."
The lab tested LIG filters with a commercial vacuum filtration system, pulling air through at a rate of 10 liters per minute for 90 hours, and found that Joule heating successfully sanitized the filters of all pathogens and byproducts. Incubating used filters for an additional 130 hours revealed no subsequent bacterial growth on the heated units, unlike control LIG filters that had not been heated.
"Bacteria culturing experiments performed on a membrane downstream from the LIG filter indicated that bacteria are unable to permeate the LIG filter," said Rice sophomore John Li, co-lead author of the paper with postdoctoral researcher Michael Stanford.
Stanford noted the sterilization feature "may reduce the frequency with which LIG filters would need to be replaced in comparison to traditional filters."
Tour suggested LIG air filters could also find their way into commercial aircraft.
"It's been predicted that by the year 2050, 10 million people per year will die of drug-resistant bacteria," he said. "The world has long needed some approach to mitigate the airborne transfer of pathogens and their related deleterious products. This LIG air filter could be an important piece in that defense."
Source and top image: Rice University
Learn more at the next leading event on the topic: Healthcare Sensor Innovations USA 2020