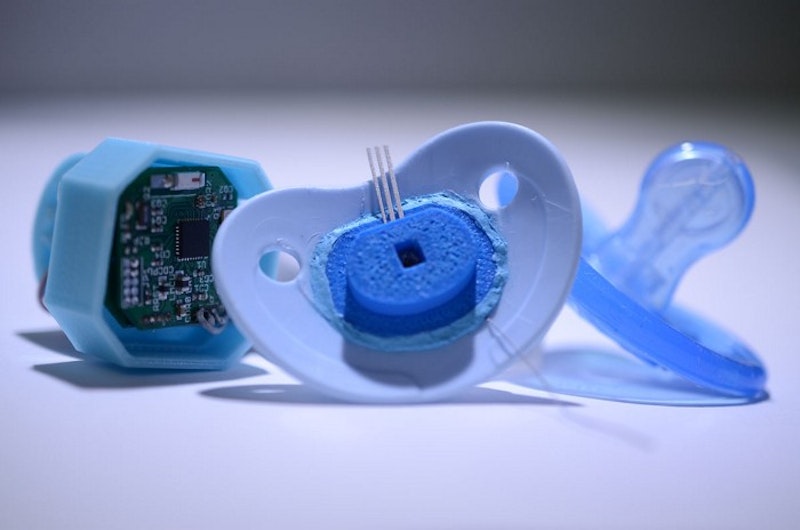 Wearable biosensors that non-invasively monitor health and fitness are growing in popularity among adults. But adapting this technology for use with babies is difficult because the devices are often bulky or have rigid surfaces that could harm infants' delicate skin. Now researchers reporting in ACS' journal Analytical Chemistry say they have developed a pacifier-based biosensor that tracks real-time glucose levels in saliva. It could ultimately help diagnose and treat diabetes in the smallest of patients. For more information on this topic, see the IDTechEx report on Technologies for Diabetes Management 2019-2029: Technology, Players and Forecasts.
Scientists have previously developed wearable biosensors that are incorporated into clothing or stuck to the skin. However, long-term use of these devices might cause discomfort that infants cannot easily communicate, among other disadvantages. So far, all of the wearable devices made for babies measure only physical characteristics like heart or respiration rate and not biomarkers, such as glucose. Continuous glucose monitoring in newborns, which is available only in major hospitals, usually requires piercing the infant's skin to reach interstitial fluid. Joseph Wang, Alberto Escarpa and colleagues wanted to develop a baby-friendly biosensor in the form of a pacifier that could collect saliva and analyze it for biomarkers.
As a proof of concept, the researchers made a pacifier with a nipple that contained a narrow channel. It was designed so that when an infant sucked on the pacifier, small amounts of saliva would be transferred through the channel to a detection chamber. There, an enzyme attached to an electrode strip would convert glucose in the fluid to a weak electrical signal, which could be detected wirelessly by a cell phone app. The strength of the current correlated with the amount of glucose in saliva samples. The researchers haven't yet tested the device with babies, but they conducted a preliminary analysis with adult type 1 diabetes patients. Using the pacifier, the team detected changes in glucose concentrations in the patients' saliva before and after a meal. The device could someday be configured to monitor other disease biomarkers, the researchers say.
Source: American Chemical Society
Top image: Analytical Chemistry
Learn more at the next leading event on the topic: Healthcare Sensor Innovations USA 2020