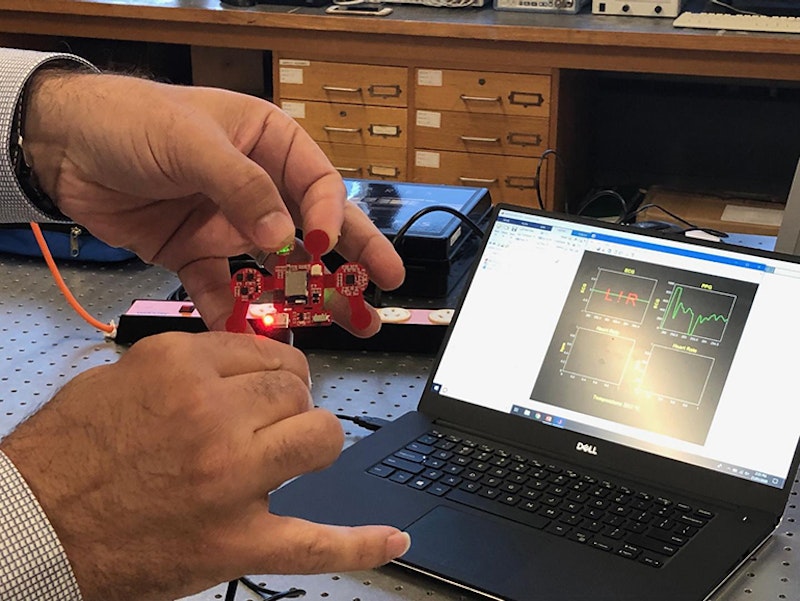 Researchers at Monash University are on the verge of creating a revolutionary, portable blood pressure monitoring device that can provide data continuously to patients from the comfort of their home.
In a world-first study, led by Associate Professor Mehmet Yuce from Monash University's Department of Electrical and Computer Systems Engineering, 43 Australian participants trialed a wireless blood pressure monitoring device, developed by the research team, which provided continual readings across a 24-hour period. Data was recorded during a range of sedentary and physical activities during the participants' regular day. Results were published in the prestigious international journal Nature Scientific Reports. For more information see the IDTechEx report on Remote Patient Monitoring 2019-2029.
Blood pressure abnormalities, such as hypertension and hypotension, are important risk factors for many critical short- and long-term illnesses, with a global disease burden of 1.25 billion people. The current gold standard for blood pressure measurement is the cuffed sphygmomanometer, commonly seen at GP clinics and hospitals.
"For close to a century, the health sector has used the cuff device to measure blood pressure. More invasive measures are used to monitor the continuous blood pressure of critically ill patients, which are uncomfortable and could potentially cause infection due to ischemia," Associate Professor Yuce said.
Researchers used continuous wave radar (CWR) and photoplethysmogram (PPG) sensors to calculate continuous blood pressure measurements. The CWR and PPG sensors were placed on the sternum and left earlobe respectively. By using radar technology, researchers were able to calculate the pre-ejection period (PEP) - the mechanical delay associated with heart movements ejecting the blood - and the pulse transit time to estimate blood pressure in patients while sitting, laying down or exercising. Results on subjects participating in posture tasks were 93 per cent accurate, while those performing exercises achieved an 83 per cent success rate.
Associate Professor Yuce and his research team have developed several prototypes of the blood pressure device, and will conduct further tests to make it more accurate and suitable for clinical use.
"Clinicians still cannot continuously measure blood pressure during sleep, nor during times of activity such as walking or running. This means people with high, low or irregular blood pressure can't get the critical information they need about the state of their health around the clock," Associate Professor Yuce said. "A wearable device that can provide comfort and portability while people are going about their daily lives will be a significant development for the health sector in Australia and internationally."
A trial was conducted on 43 participants, between the ages of 40 and 65, with no previous cardiovascular problems. Participants wore both the cuff device and the chest-based prototype to monitor the difference between blood pressure readings. Blood pressure data was recorded on all participants while sitting, standing and laying in the supine position (facing upwards). Subsequent tests were also conducted with patients holding a handgrip for two minutes; cycling at a fixed speed across three different resistance levels; and at the recovery stage after the cycling tasks.
The technology has the capability of providing real-time access to data, and to give doctors an overview of how their patients' blood pressure changes over the course of a day, rather than at the time of testing.
"The CWR sensors present a low-power, continuous and potentially wearable system with minimal body contact to monitor aortic valve activities directly. Doctors would be interested to see such information for long-term better diagnosis of their patients," Associate Professor Yuce said. "Results of this study demonstrate the potential superiority of CWR-based PEP extraction for various medical monitoring applications, including blood pressure monitoring."
Source and top image: Monash University