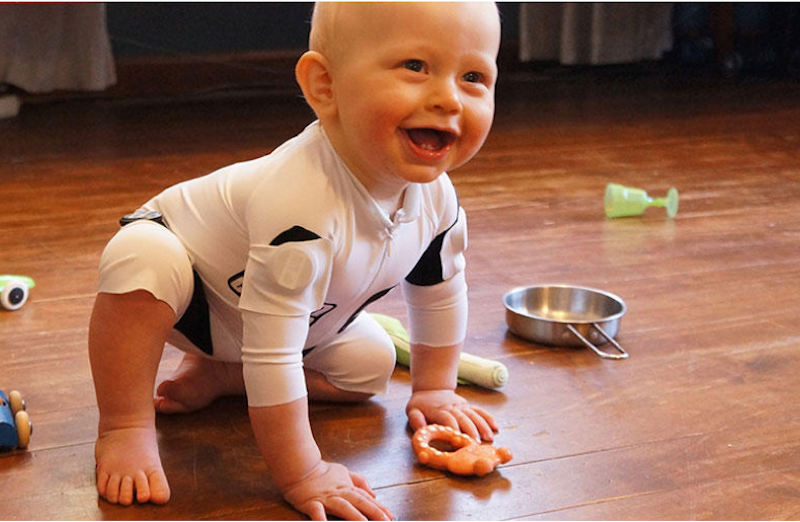 A new innovation makes it possible, for the first time, to quantitatively assess children's spontaneous movement in the natural environment. Researchers have developed a smart jumpsuit, or a garment that accurately measures the spontaneous and voluntary movement of infants from the age of five months. Details on their motility help in assessing abnormal neurological development, among other things. The study on the smart jumpsuit and the related analysis method applied to 7-month-old infants was published in the Scientific Reports journal. In the future, the jumpsuit can also be used to study older children.
The assessment of spontaneous and voluntary movements is part of the neurological examination of infants. Previously, the quantitative tracking of children's spontaneous motility in the natural environment has not been possible. Instead, children have been primarily qualitatively assessed at the physician's or physiotherapist's practice, which requires taking into account the fact that the infant's behaviour in the practice setting does not necessarily entirely match that seen at home. For further information see the IDTechEx report on Wearable Technology Forecasts 2019-2029.
"The smart jumpsuit provides us with the first opportunity to quantify infants' spontaneous and voluntary movements outside the laboratory. The child can be sent back home with the suit for the rest of the day. The next day, it will be returned to the hospital where the results will then be processed," explains Sampsa Vanhatalo, professor of clinical neurophysiology at the University of Helsinki. Vanhatalo says that the new analysis method quantifies infant motility as reliably as a human being would be able to do by viewing a video recording. After the measurement, the infant's actual movements and physical positions will be known to the second, after which computational measures can be applied to the data. "This is a revolutionary step forward. The measurements provide a tool to detect the precise variation in motility from the age of five months, something which medical smart clothes have not been able to do until now."
Neur­o­lo­gical ab­nor­mal­it­ies should be de­tec­ted early on
The data gleaned by the smart jumpsuit is valuable, since the detection of abnormalities in the neurological development of infants at an early stage enables early support. Brain plasticity is at its strongest in early childhood, and is benefited by measures supporting development, which are targeted at recurring everyday activities.
At least 5% of Finnish children suffer from problems associated with language development, attention regulation and motor development. Often, such problems overlap. The pathogenic mechanisms underlying developmental disorders are complex, but preterm birth, perinatal brain damage and the lack of early care, as well as insufficient stimulation in the growth environment aggravate the risk of developmental problems.
According to Leena Haataja, professor of paediatric neurology, developmental disorders in today's pressure-dominated world pose a considerable risk that can lead to learning difficulties and obstacles in the competition for education and jobs. Furthermore, they are a risk factor associated with exclusion from contemporary society. "The early identification of developmental disorders and support for infants' everyday functional capacity in interaction with the family and the growth environment constitute a significant factor on the level of individuals, families and society," Haataja notes.
In the future, the smart jumpsuit can be used for the objective measurement of how various therapies and treatments affect children's development. "This is the million-dollar question in Western healthcare. In addition, we may be able to quantify how early motor development associates with later cognitive development," Vanhatalo says.
The smart jumpsuit was developed under the Rhythms in Infant Brain (RIB) project, part of the Health from Science (TERVA) programme funded by the Academy of Finland, the Foundation for Pediatric Research and the Finnish Brain Foundation. The multidisciplinary research group, which operates in the New Children's Hospital, is headed by neurophysiologist Sampsa Vanhatalo and paediatric neurologist Leena Haataja. In addition to physicians, the group comprises psychologists, physiotherapists, nurses and engineers.
The textile and usability design of the smart jumpsuit was coordinated by researcher Elina Ilén, while researchers Manu Airaksinen and Okko Räsänen from Aalto University were in charge of AI analyses. The project utilised the Movesense sensor, an open-source device developed in Finland by Suunto, and a mobile application developed by the German company Kaasa.
Source and top image: University of Helsinki