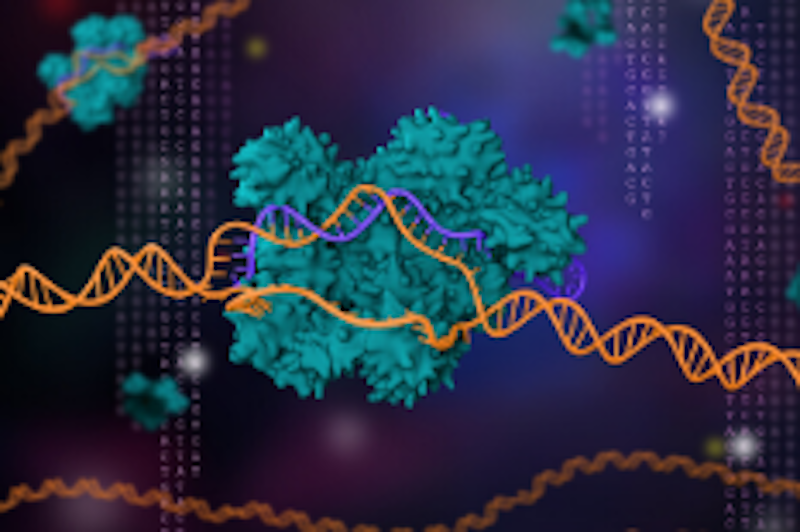 In an effort to create first-of-kind microelectronic devices that connect with biological systems, University of Maryland (UMD) researchers are utilizing CRISPR technology in a novel way to electronically turn "on" and "off" several genes simultaneously. Their technique, published in Nature Communications, has the potential to further bridge the gap between the electronic and biological worlds, paving the way for new wearable and "smart" devices.
"Faced with the COVID-19 pandemic, we now have an even deeper understanding of how 'smart' devices could benefit the general population," said William E. Bentley, professor in UMD's Fischell Department of Bioengineering and Institute for Bioscience and Biotechnology Research (IBBR), and director of the Robert E. Fischell Institute for Biomedical Devices. "Imagine what the world would be like if we could wear a device and access an app on our smartphone capable of detecting whether the wearer has the active virus, generated immunity, or has not been infected. We don't have this yet, but it is increasingly clear that a suite of technologies enabling rapid transfer of information between biology and electronics is needed to make this a reality. " For further information see the IDTechEx report on Synthetic Biology 2018.
With such a device, this information could be used, for example, to dynamically and autonomously conduct effective contact tracing, Bentley said.
In the past 60 years, microelectronics have greatly evolved from the first implantable pacemaker to personal wearables that harness the power of interrelated computing devices - better known as the Internet of things, or IoT. The next great wave of microelectronics could include devices that tap into and control molecules - such as glucose, hormones, or DNA - to better human health. But, a major roadblock remains.
Despite how advanced current smart devices might be, today's microelectronic devices process information using materials such as silicon, gold, or chemicals, and an energy source that provides electrons. But, free electrons do not exist in biological systems. As such, there remains a technology gap between microelectronics and the biological world. Over two years ago, Bentley, his IBBR and Fischell Institute colleague, Gregory F,. Payne, and their teams published research on a loophole they discovered.
In biological systems, there already exists a small class of molecules capable of shuttling electrons. These molecules, known as "redox" molecules, can transport electrons to any location. To do this, redox molecules must first undergo a series of chemical reactions - oxidation or reduction reactions - to transport electrons to the intended target.
By engineering cells with synthetic biology components, Bentley's research team created a sophisticated synthetic "switching" system in bacterial cells that recognizes electrons instead of more traditional molecular signals and incorporates the biologically programmable genetic circuitry of CRISPR. Best known for gene editing, CRISPR control functions were modified to work with SoxR, a regulatory protein that is responsive to redox molecules and is found in E.coli. Instead of editing genes, the team is using CRISPR to focus a cell's metabolic machinery to carry out desired functions.
The group's process involves what is known as downregulation and upregulation, whereby, a cell either decreases (downregulation) or increases (upregulation) the quantity of a particular component - such as a protein - in response to an external stimulus. The team successfully demonstrated that, using CRISPR, they could electrically program the upregulation and downregulation of specific genes in E.coli as well as in Salmonella. In this way, the team proved that information programmed electrically can be transmitted to and within many strains of bacteria using the same medium of redox as a communication channel.
Even more, the group created and applied CRISPR technology to take advantage of the signal processing capabilities in electronics and telecommunications. They immobilized cells in a gel and used electronic signals to create a well-defined chemical gradient of the CRISPR-controlling extracellular signal. They showed that cells exposed to the most highly oxidized pyocyanin - a metabolite capable of participating in a redox reaction - showcased the highest level of CRISPR activity, while the cells exposed to minimally oxidized pyocyanin demonstrated the lowest level of CRISPR activity. In so doing, the team effectively supported their hypothesis that electrical signals could be used to spatially control CRISPR.
While CRISPR is universally considered an agile tool for biology, this work represents the first demonstration of how CRISPR can be used in bioelectronics to electronically target and control select genes, simultaneously.
"Our next steps involve ramping up our bioelectronics work so that the next generation communication devices can indeed incorporate biological information that is obtained locally," Bentley said.
Source and top image: University of Maryland