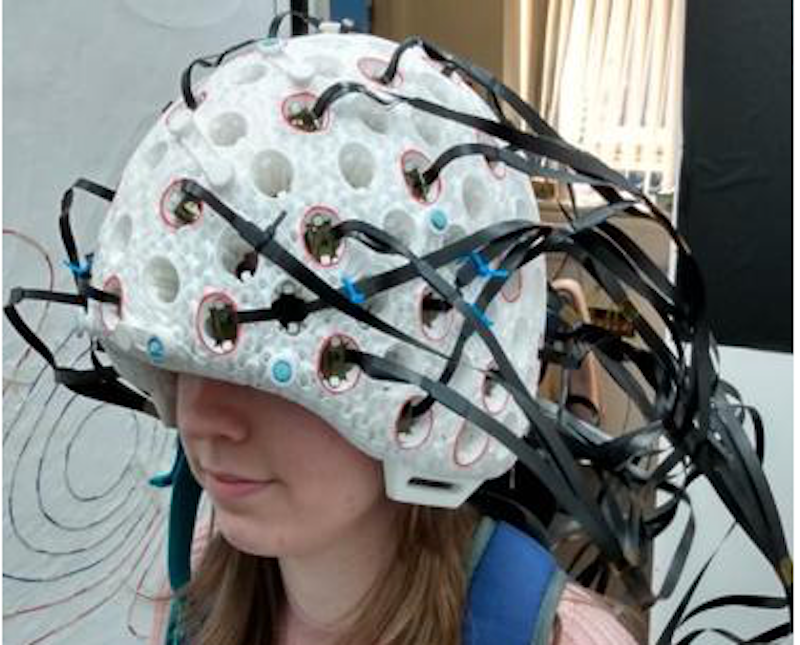 Scientists from the University of Nottingham developed an initial prototype of a new generation of brain scanner in 2018 which is a lightweight device that can be worn on the head like a hat, and can scan the brain even whilst a patient moves. Their latest research has now expanded this to a fully functional 49 channel device that can be used to scan the whole brain and track electrophysiological processes that are implicated in a number of mental health problems. Their findings have been published in Neuroimage. For further information see the IDTechEx report on Biomedical Diagnostics at Point-of-Care 2019-2029: Technologies, Applications, Forecasts.
Professor Matt Brookes from the University of Nottingham has led the development of this wearable scanner, he said: "Understanding mental illness remains one of the greatest challenges facing 21st century science. From childhood illnesses such as Autism, to neurodegenerative diseases such as Alzheimer's, human brain health affects millions of people throughout the lifespan. In many cases, even highly detailed brain images showing what the brain looks like fail to tell us about underlying pathology, and consequently there is an urgent need for new technologies to measure what the brain actually does in health and disease."
Brain cells operate and communicate by producing electrical currents. These currents generate tiny magnetic fields that can be detected outside the head. Researchers use MEG to map brain function by measuring these magnetic fields. This allows for a millisecond-by-millisecond picture of which parts of the brain are engaged when we undertake different tasks, such as speaking or moving.
Unlike the large cumbersome scanners where patients must remain very still, the wearable scanner allows the patient to move freely. The early prototype of this system in 2018 had just 13 sensors and could only scan limited sections of the brain. Further developments in 2019 enabled the first measurements in children.
The team worked with Added Scientific in Nottingham to develop a novel type of 3D printed helmet, which is key to the function of the 49 channel device. The higher channel count means that the system can be used to scan the whole brain. It can show the brain areas controlling hand movement and vision pinpointed with millimetre accuracy.
Ryan Hill lead author on this study said: "Although there is exciting potential, OPM-MEG is a nascent technology with significant development still required. Whilst multi-channel systems are available, most demonstrations still employ small numbers of sensors sited over specific brain regions and the introduction of a whole-head array is an important step forward in moving this technology towards effective commercial application."
This new whole head scanner unlocks a hots of new possibilities, like scanning children (who find it hard to keep still) or scanning epileptic patients during seizures to understand the abnormal brain activity that generates those seizures.
Professor Brookes continues: Our group in Nottingham, alongside partners at UCL, are now driving this research forward, not only to develop a new understanding of brain function, but also to commercialise the equipment that we have developed. Components of the scanner have already been sold, via industrial partners, to brain imaging laboratories across the world. It is thought that not only will the new scanner be significantly better than anything that currently exists, but also that it will be significantly cheaper."
Source and top image: University of Nottingham