Flexible Material Shows Potential for Use in Fabrics to Heat, Cool 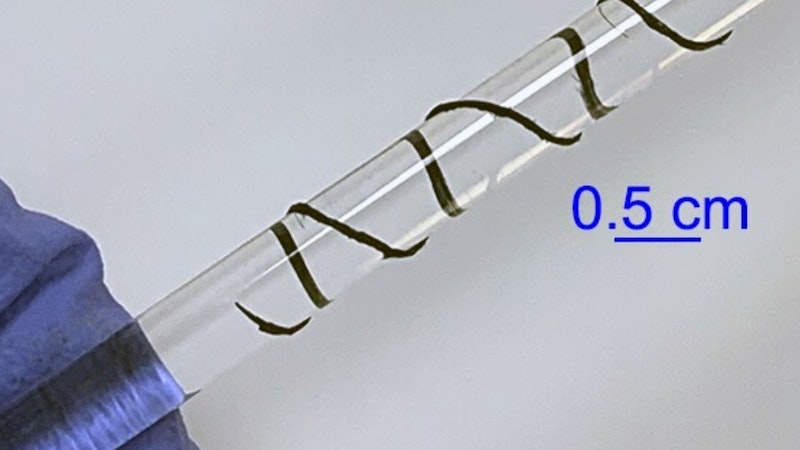 A film made of tiny carbon nanotubes (CNT) may be a key material in developing clothing that can heat or cool the wearer on demand. A new North Carolina State University study finds that the CNT film has a combination of thermal, electrical and physical properties that make it an appealing candidate for next-generation smart fabrics.
The researchers were also able to optimize the thermal and electrical properties of the material, allowing the material to retain its desirable properties even when exposed to air for many weeks. Moreover, these properties were achieved using processes that were relatively simple and did not need excessively high temperatures. For further information see the IDTechEx report on E-textiles and Smart Clothing 2020-2030: Technologies, Markets and Players.
"Many researchers are trying to develop a material that is non-toxic and inexpensive, but at the same time is efficient at heating and cooling," said Tushar Ghosh, co-corresponding author of the study. "Carbon nanotubes, if used appropriately, are safe, and we are using a form that happens to be inexpensive, relatively speaking. So it's potentially a more affordable thermoelectric material that could be used next to the skin." Ghosh is the William A. Klopman Distinguished Professor of Textiles in NC State's Wilson College of Textiles.
"We want to integrate this material into the fabric itself," said Kony Chatterjee, first author of the study and a Ph.D. student at NC State. "Right now, the research into clothing that can regulate temperature focuses heavily on integrating rigid materials into fabrics, and commercial wearable thermoelectric devices on the market aren't flexible either."
To cool the wearer, Chatterjee said, CNTs have properties that would allow heat to be drawn away from the body when an external source of current is applied. "Think of it like a film, with cooling properties on one side of it and heating on the other," Ghosh said. The researchers measured the material's ability to conduct electricity, as well as its thermal conductivity, or how easily heat passes through the material.
One of the biggest findings was that the material has relatively low thermal conductivity - meaning heat would not travel back to the wearer easily after leaving the body in order to cool it. That also means that if the material were used to warm the wearer, the heat would travel with a current toward the body, and not pass back out to the atmosphere.
The researchers were able to accurately measure the material's thermal conductivity through a collaboration with the lab of Jun Liu, an assistant professor of mechanical and aerospace engineering at NC State. The researchers used a special experimental design to more accurately measure the material's thermal conductivity in the direction that the electric current is moving within the material.
"You have to measure each property in the same direction to give you a reasonable estimate of the material's capabilities," said Liu, co-corresponding author of the study. "This was not an easy task; it was very challenging, but we developed a method to measure this, especially for thin flexible films."
The research team also measured the ability of the material to generate electricity using a difference in temperature, or thermal gradient, between two environments. Researchers said that they could take advantage of this for heating, cooling, or to power small electronics.
Liu said that while these thermoelectric properties were important, it was also key that they found a material that was also flexible, stable in air, and relatively simple to make.
"The point of this paper isn't that we achieved the best thermoelectric performance," Liu said. "We achieved something that can be used as a flexible, electronic, soft material that's easy to fabricate. It's easy to prepare this material, and easy to achieve these properties."
Ultimately, their vision for the project is to design a smart fabric that can heat and cool the wearer, along with energy harvesting. They believe that a smart garment could help reduce energy consumption.
"Instead of heating or cooling a whole dwelling or space, you would heat or cool the personal space around the body," Ghosh said. "If we could get the thermostat down a degree or two, that could save a tremendous amount of energy."
Source and top image: North Carolina State University