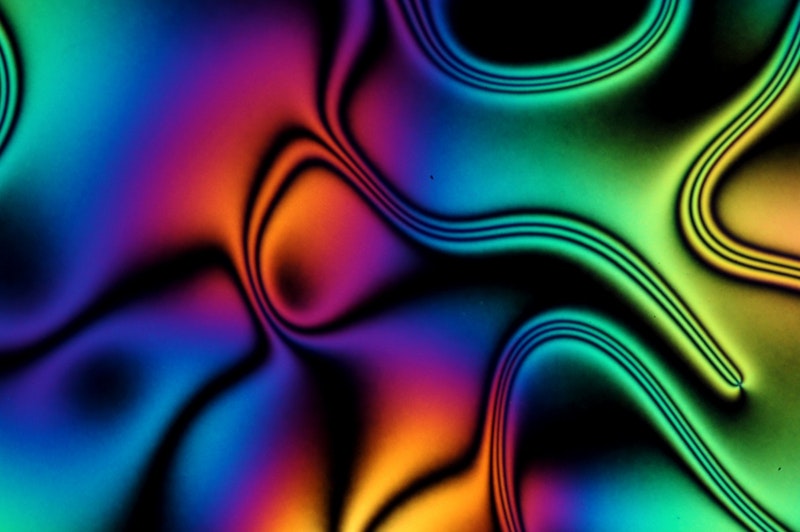 Chameleons are famous for their color-changing abilities. Depending on their body temperature or mood, their nervous system directs skin tissue that contains nanocrystals to expand or contract, changing how the nanocrystals reflect light and turning the reptile's skin a rainbow of colors. Inspired by this, scientists at the Pritzker School of Molecular Engineering (PME) at the University of Chicago have developed a way to stretch and strain liquid crystals to generate different colors.
By creating a thin film of polymer filled with liquid crystal droplets and then manipulating it, they have determined the fundamentals for a color-changing sensing system that could be used for smart coatings, sensors, and even wearable electronics. The research, led by Juan de Pablo, Liew Family Professor of Molecular Engineering, was published July 10 in the journal Science Advances. For more information see the IDTechEx report on Wearable Technology Forecasts: 2020-2030.
Stretching liquid using thin films
Liquid crystals, which exhibit distinct molecular orientations, are already the basis for many display technologies. But de Pablo and his team were interested in chiral liquid crystals, which have twists and turns and a certain asymmetrical "handedness"—like right-handedness or left-handedness—that allows them to have more interesting optical behaviors.
These crystals can also form so-called "blue phase crystals," which have the properties of both liquids and crystals and can in some cases transmit or reflect visible light better than liquid crystals themselves. The researchers knew that these crystals could potentially be manipulated to produce a wide range of optical effects if stretched or strained, but they also knew that it's not possible to stretch or strain a liquid directly. Instead, they placed tiny liquid crystal droplets into a polymer film.
"That way we could encapsulate chiral liquid crystals and deform them in very specific, highly controlled ways," de Pablo said. "That allows you to understand the properties they can have and what behaviors they exhibit."
Creating temperature and strain sensors
By doing this, the researchers found many more different phases—molecular configurations of the crystals—than had been known before. These phases produce different colors based on how they are stretched or strained, or even when they undergo temperature changes.
"Now the possibilities are really open to the imagination," de Pablo said. "Imagine using these crystals in a textile that changes color based on your temperature, or changes color where you bend your elbow."
Such a system could also be used to measure strain in airplane wings, for example, or to discern minute changes in temperature within a room or system.
Changes in color provide an excellent way to measure something remotely, without the need for any sort of contact, de Pablo said. "You could just look at the color of your device and know how much strain that material or device is under and take corrective action as needed," he said. "For example, if a structure is under too much stress, you could see the color change right away and close it down to repair it. Or if a patient or an athlete placed too much strain on a particular body part as they move, they could wear a fabric to measure it and then try to correct it."
Though the researchers manipulated the materials with strain and temperature, there's also the potential to affect them with voltage, magnetic fields, and acoustic fields, he said, which could lead to new kinds of electronic devices made from these crystals.
"Now that we have the fundamental science to understand how these materials behave, we can start applying them to different technologies," de Pablo said.
Source and top image: University of Chicago