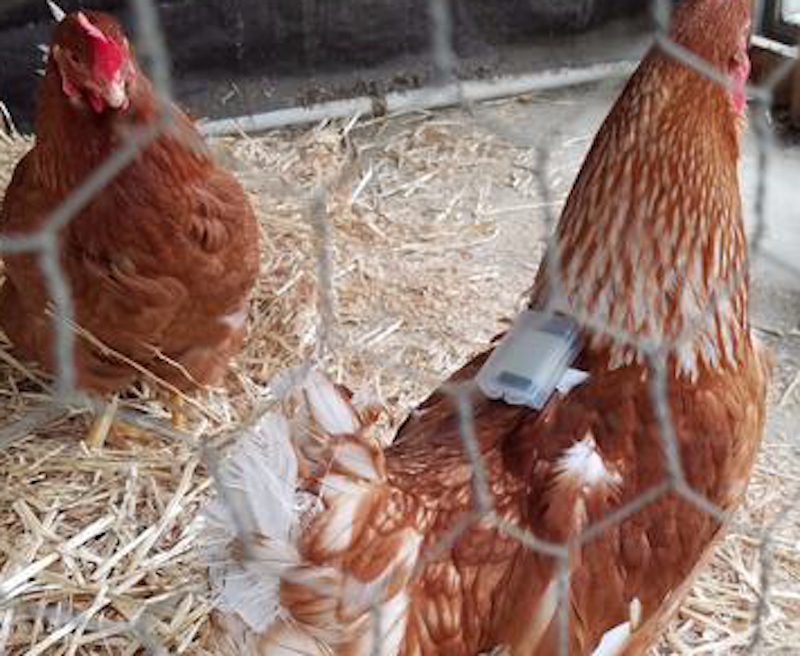 Blood-feeding livestock mites can be detected with wearable sensor technology nicknamed "Fitbits for chickens." To help farmers detect mite infestations, a team of entomologists, computer scientists, and biologists led by UC Riverside entomologist Amy Murillo has created a new insect detection system. The team's work is detailed in the journal Scientific Reports.
In recent years, concern for the well-being of livestock has given rise to more farms where poultry are allowed to roam. Though this freedom improves the quality of chickens' lives, free-range chickens are still subject to insect infestations. For further information see the IDTechEx report on Wearable Technology for Animals 2017-2027: Technologies, Markets, Forecasts.
"The trend in egg sales is 'cage free,' but that doesn't necessarily mean the chickens are insect free," Murillo said. Of particular concern to scientists is the northern fowl mite, which Murillo said feeds on chicken blood and lives on hens in feathers surrounding "the butt area of the chicken."
In addition to the economic consequences of infected hens laying fewer eggs, mites can make the chickens sick and cause lesions to develop on their skin. "Fowl mites are very unpleasant for the birds being fed upon and cause an itchy immune response," Murillo said.
To devise their detection system, Murillo's team first identified three key chicken pastimes closely linked to chickens' well-being: pecking, preening, and dustbathing. The team hypothesized they would see a big increase in preening and dustbathing among infected chickens because these activities keep feathers clean. The team placed motion sensors into tiny backpacks the chickens could wear without discomfort. The next challenge was translating data from these sensors into algorithms that could be detected as behaviors.
Alireza Abdoli, a doctoral student in computer science at UCR, explained that quantifying fowl behavior isn't as simple as working with human behaviors like walking, because it isn't as regular. In order to train a computer to recognize chicken behaviors, Abdoli had to take an unusual approach. He created an algorithm, or set of instructions, for the computer that considers the shape that the backpack sensor data makes on a graph, as well as features of the data such as mean and max.
"Most algorithms use either shape or features, but not both," Abdoli said. "Our approach is exciting because it increases the accuracy of the data so much and is key to making good decisions about the chickens' health."
Traditional animal behavior studies have had to rely on video or visual observations, which can be both time consuming and prone to errors. Murillo did some flock observations at the beginning of the project to make sure the computer's conclusions about behaviors were accurate. Once they were certain, observations were no longer necessary, and the computer could take over.
Not only does this new approach increase the reliability of scientists' observations, it also increases the number of animals and length of time they can be tracked. The flock in this study did suffer from a mite infestation, which the team related to an increase in cleaning behaviors. Once the birds were treated and healed, the data showed preening and dust baths went back to normal levels.Far more than farm fashion, these "Fitbits for chickens" offer valuable information for livestock farmers.
"These results could let farmers know it's time to examine their birds for parasites," Murillo said. "And the tools we developed can also be used examine the effects of any change in a bird's environment or diet."
Source and top image: University of California Riverside