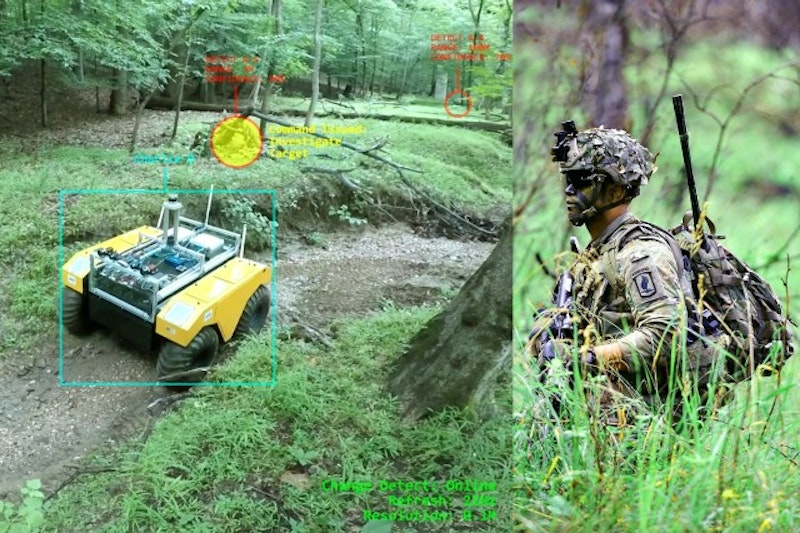 Something is different, and you can't quite put your finger on it. But your robot can. Even small changes in your surroundings could indicate danger. Imagine a robot could detect those changes, and a warning could immediately alert you through a display in your eyeglasses. That is what US Army scientists are developing with sensors, robots, real-time change detection and augmented reality wearables.
Army researchers demonstrated in a real-world environment the first human-robot team in which the robot detects physical changes in 3D and shares that information with a human in real-time through augmented reality, who is then able to evaluate the information received and decide follow-on action. For further information see the IDTechEx report on Augmented, Mixed and Virtual Reality 2020-2030: Forecasts, Markets and Technologies.
"This could let robots inform their Soldier teammates of changes in the environment that might be overlooked by or not perceptible to the Soldier, giving them increased situational awareness and offset from potential adversaries," said Dr Christopher Reardon, a researcher at the U.S. Army Combat Capabilities Development Command's Army Research Laboratory. "This could detect anything from camouflaged enemy soldiers to IEDs."
Part of the lab's effort in contextual understanding through the Artificial Intelligence for Mobility and Maneuver Essential Research Program, this research explores how to provide contextual awareness to autonomous robotic ground platforms in maneuver and mobility scenarios. Researchers also participate with international coalition partners in the Technical Cooperation Program's Contested Urban Environment Strategic Challenge, or TTCP CUESC, events to test and evaluate human-robot teaming technologies.
Most academic research in the use of mixed reality interfaces for human-robot teaming does not enter real-world environments, but rather uses external instrumentation in a lab to manage the calculations necessary to share information between a human and robot. Likewise, most engineering efforts to provide humans with mixed-reality interfaces do not examine teaming with autonomous mobile robots, Reardon said. 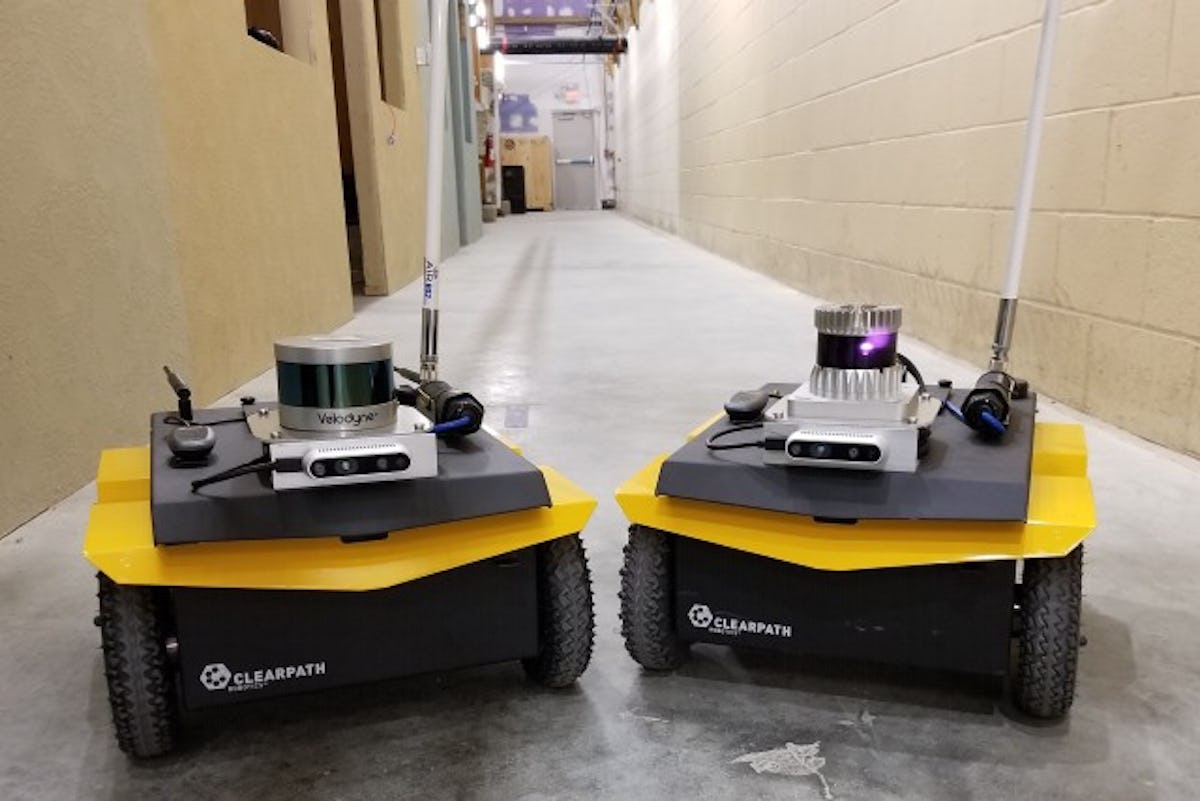 The research paired a small autonomous mobile ground robot, equipped with laser ranging sensors, known as LIDAR, to build a representation of the environment, with a human teammate wearing augmented reality glasses. As the robot patrolled the environment, it compared its current and previous readings to detect changes in the environment. Those changes were then instantly displayed in the human's eyewear to determine whether the human could interpret the changes in the environment.
In studying communication between the robot and human team, the researchers tested different resolution LIDAR sensors on the robot to collect measurements of the environment and detect changes. When those changes were shared using augmented reality to the human, the researchers found that human teammates could interpret changes that even the lower-resolution LIDARs detected. This indicates that--depending on the size of the changes expected to encounter--lighter, smaller and less expensive sensors could perform just as well, and run faster in the process.
This capability has the potential to be incorporated into future Soldier mixed-reality interfaces such as the Army's Integrated Visual Augmentation System goggles, or IVAS.
"Incorporating mixed reality into Soldiers' eye protection is inevitable," Reardon said. "This research aims to fill gaps by incorporating useful information from robot teammates into the Soldier-worn visual augmentation ecosystem, while simultaneously making the robots better teammates to the Soldier."
Future studies will continue to explore how to strengthen the teaming between humans and autonomous agents by allowing the human to interact with the detected changes, which will provide more information to the robot about the context of the change-for example, changes made by adversaries versus natural environmental changes or false positives, Reardon said. This will improve the autonomous context understanding and reasoning capabilities of the robotic platform, such as by enabling the robot to learn and predict what types of changes constitute a threat. In turn, providing this understanding to autonomy will help researchers learn how improve teaming of Soldiers with autonomous platforms.
Source and images: US Army