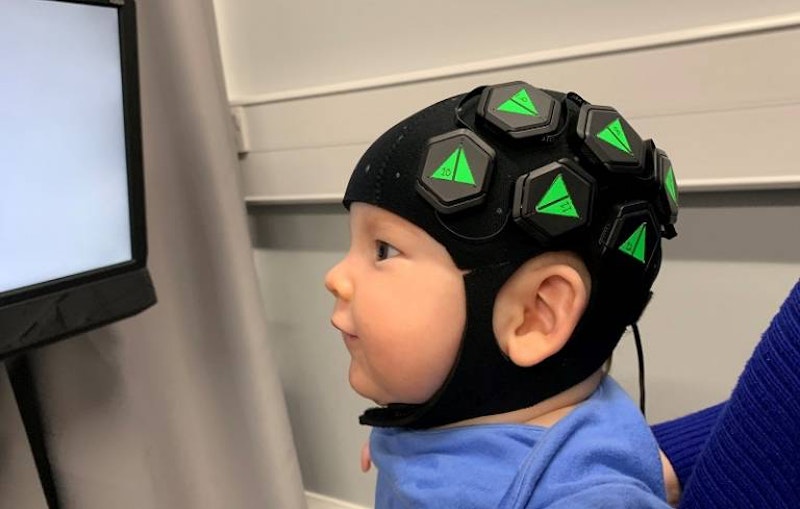 A team led by University College London (UCL) researchers has demonstrated a new form of wearable, baby-friendly brain mapping technology that has important implications for understanding developmental conditions such as autism spectrum disorder and cerebral palsy.
The technology uses harmless levels of red and near-infrared light delivered via a wearable cap to generate detailed 3D images of babies' brain activity. It means doctors and neuroscientists can image a baby's brain without needing MRI, which is expensive and difficult to apply while babies are awake.
It also means researchers can study the infant brain in almost any environment, including in the home where babies and parents naturally interact. For further information see the IDTechEx report on Wearable Technology Forecasts: 2020-2030.
In the paper, published in NeuroImage, academics and engineers from UCL, Cambridge University, the Rosie Hospital in Cambridge and London-based start-up company Gowerlabs Ltd demonstrate the technique, known as high-density diffuse optical tomography (HD-DOT), in six-month old infants. The wearable cap employs hundreds of LEDs and optical detectors arranged in a dense network over the scalp to map changes in oxygenation in the brain.
These changes in oxygenation show the areas of the brain that are busy processing information, meaning the team was were able to create high-quality, 3D images of baby brain activity for the first time outside an MRI scanner.
Project lead Dr Rob Cooper (UCL Medical Physics & Biomedical Engineering) explained: "There is a lot we still don't know about how the brain develops, and a big part of the problem is that studying the infant brain is really difficult with traditional scanners. "As any parent knows, 6-month old babies are very active; they move around all the time and are easily distracted. Using a technique like MRI, the subject has to remain completely still, which is almost impossible with babies unless they are asleep or sedated."
Elisabetta Maria Frijia (UCL Medical Physics & Biomedical Engineering), who carried out much of the work demonstrating the technology, added: "The approach we have demonstrated is safe, silent and wearable, and can produce images of brain function with better spatial resolution than any other comparable technology. Our hope is that this new generation of technologies will allow researchers from a whole range of fields to learn more about how the healthy infant brain develops and establish new ways of diagnosing, monitoring and ultimately treating neurological conditions like autism and cerebral palsy."
The technology was developed by UCL spinout company Gowerlabs Ltd., whilst the work demonstrating its capabilities was led by Dr Cooper, with support from an EPSRC Early Career Fellowship.
Source and top image: University College London