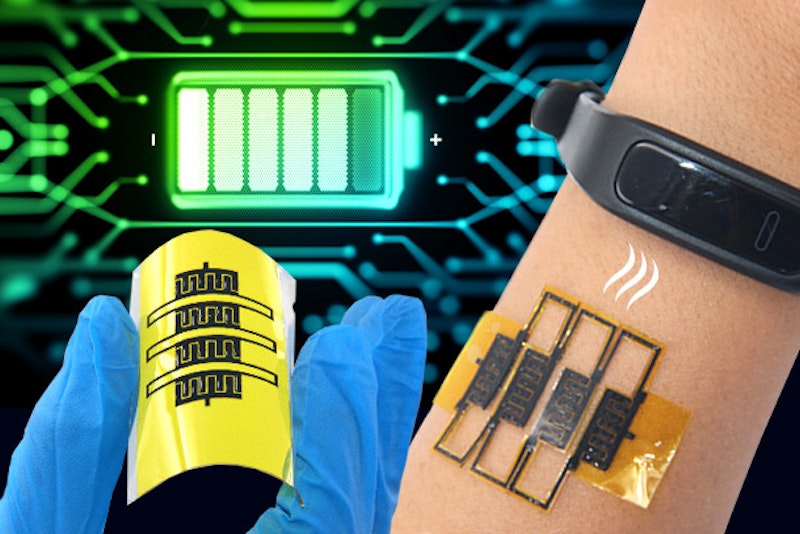 A stretchable system that can harvest energy from human breathing and motion for use in wearable health-monitoring devices may be possible, according to an international team of researchers, led by Huanyu "Larry" Cheng, Dorothy Quiggle Career Development Professor in Penn State's Department of Engineering Science and Mechanics. The research team, with members from Penn State and Minjiang University and Nanjing University, both in China, recently published its results in Nano Energy.
According to Cheng, current versions of batteries and supercapacitors powering wearable and stretchable health-monitoring and diagnostic devices have many shortcomings, including low energy density and limited stretchability. For further information see the IDTechEx report on Supercapacitor Materials and Formats 2020-2040.
"This is something quite different than what we have worked on before, but it is a vital part of the equation," Cheng said, noting that his research group and collaborators tend to focus on developing the sensors in wearable devices. "While working on gas sensors and other wearable devices, we always need to combine these devices with a battery for powering. Using micro-supercapacitors gives us the ability to self-power the sensor without the need for a battery."
An alternative to batteries, micro-supercapacitors are energy storage devices that can complement or replace lithium-ion batteries in wearable devices. Micro-supercapacitors have a small footprint, high power density, and the ability to charge and discharge quickly. However, according to Cheng, when fabricated for wearable devices, conventional micro-supercapacitors have a "sandwich-like" stacked geometry that displays poor flexibility, long ion diffusion distances and a complex integration process when combined with wearable electronics.
This led Cheng and his team to explore alternative device architectures and integration processes to advance the use of micro-supercapacitors in wearable devices. They found that arranging micro-supercapacitor cells in a serpentine, island-bridge layout allows the configuration to stretch and bend at the bridges, while reducing deformation of the micro-supercapacitors — the islands. When combined, the structure becomes what the researchers refer to as "micro-supercapacitors arrays."
"By using an island-bridge design when connecting cells, the micro-supercapacitor arrays displayed increased stretchability and allowed for adjustable voltage outputs," Cheng said. "This allows the system to be reversibly stretched up to 100%."
By using non-layered, ultrathin zinc-phosphorus nanosheets and 3D laser-induced graphene foam — a highly porous, self-heating nanomaterial — to construct the island-bridge design of the cells, Cheng and his team saw drastic improvements in electric conductivity and the number of absorbed charged ions. This proved that these micro-supercapacitor arrays can charge and discharge efficiently and store the energy needed to power a wearable device.
The researchers also integrated the system with a triboelectric nanogenerator, an emerging technology that converts mechanical movement to electrical energy. This combination created a self-powered system.
"When we have this wireless charging module that's based on the triboelectric nanogenerator, we can harvest energy based on motion, such as bending your elbow or breathing and speaking," Cheng said. "We are able to use these everyday human motions to charge the micro-supercapacitors."
By combining this integrated system with a graphene-based strain sensor, the energy-storing micro-supercapacitor arrays — charged by the triboelectric nanogenerators — are able to power the sensor, Cheng said, showing the potential for this system to power wearable, stretchable devices.
Source and top image: Penn State University