Wearables for Crops: Plant Based Sensor Monitors Arsenic in Soil 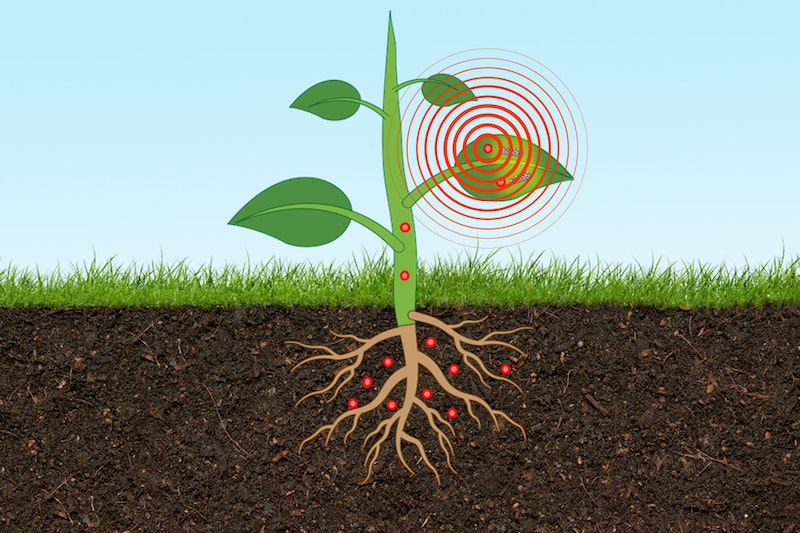 Scientists from the Disruptive and Sustainable Technologies for Agricultural Precision (DiSTAP) research group at the Singapore-MIT Alliance for Research and Technology (SMART), MIT's research enterprise in Singapore, have engineered a novel type of plant nanobionic optical sensor that can detect and monitor, in real time, levels of the highly toxic heavy metal arsenic in the underground environment. This development provides significant advantages over conventional methods used to measure arsenic in the environment and will be important for both environmental monitoring and agricultural applications to safeguard food safety, as arsenic is a contaminant in many common agricultural products such as rice, vegetables, and tea leaves.
This new approach is described in a paper titled "Plant Nanobionic Sensors for Arsenic Detection," published recently in Advanced Materials. The paper was led by Tedrick Thomas Salim Lew, a recent graduate student of MIT, and co-authored by Michael Strano, co-lead principal investigator of DiSTAP and the Carbon P. Dubbs Professor at MIT, as well as Minkyung Park and Jianqiao Cui, both graduate students at MIT. For further information see the IDTechEx report on Flexible Hybrid Electronics 2020-2030: Applications, Challenges, Innovations and Forecasts.
Arsenic and its compounds are a serious threat to humans and ecosystems. Long-term exposure to arsenic in humans can cause a wide range of detrimental health effects, including cardiovascular disease such as heart attack, diabetes, birth defects, severe skin lesions, and numerous cancers including those of the skin, bladder, and lung. Elevated levels of soil arsenic as a result of anthropogenic activities such as mining and smelting are also harmful to plants, inhibiting growth and resulting in substantial crop losses.
Food crops can absorb arsenic from the soil, leading to contamination of food and produce consumed by humans. Arsenic in underground environments can also contaminate groundwater and other underground water sources, the long-term consumption of which can cause severe health issues. As such, developing accurate, effective, and easy-to-deploy arsenic sensors is important to protect both the agriculture industry and wider environmental safety.
The novel optical nanosensors exhibit changes in their fluorescence intensity upon detecting arsenic. Embedded in plant tissues, with no detrimental effects on the plant, these sensors provide a nondestructive way to monitor the internal dynamics of arsenic taken up by plants from the soil. This integration of optical nanosensors within living plants enables the conversion of plants into self-powered detectors of arsenic from their natural environment, marking a significant upgrade from the time- and equipment-intensive arsenic sampling methods of current conventional methods.
"Our plant-based nanosensor is notable not only for being the first of its kind, but also for the significant advantages it confers over conventional methods of measuring arsenic levels in the below-ground environment, requiring less time, equipment, and manpower," says Lew. "We envision that this innovation will eventually see wide use in the agriculture industry and beyond. I am grateful to SMART DiSTAP and the Temasek Life Sciences Laboratory (TLL), both of which were instrumental in idea generation and scientific discussion as well as research funding for this work."
Besides detecting arsenic in rice and spinach, the team also used a species of fern, Pteris cretica, which can hyperaccumulate arsenic. This fern species can absorb and tolerate high levels of arsenic with no detrimental effect — engineering an ultrasensitive plant-based arsenic detector, capable of detecting very low concentrations of arsenic, as low as 0.2 parts per billion. In contrast, the regulatory limit for arsenic detectors is 10 parts per billion. Notably, the novel nanosensors can also be integrated into other species of plants. The researchers say this is the first successful demonstration of living plant-based sensors for arsenic and represents a groundbreaking advancement that could prove highly useful in both agricultural research (eg, to monitor arsenic taken up by edible crops for food safety) and general environmental monitoring.
Previously, conventional methods of measuring arsenic levels included regular field sampling, plant tissue digestion, extraction, and analysis using mass spectrometry. These methods are time-consuming, require extensive sample treatment, and often involve the use of bulky and expensive instrumentation. The new approach couples nanoparticle sensors with plants' natural ability to efficiently extract analytes via the roots and transport them. This allows for the detection of arsenic uptake in living plants in real time, with portable, inexpensive electronics such as a portable Raspberry Pi platform equipped with a charge-coupled device camera akin to a smartphone camera.
Co-author, DiSTAP co-lead principal investigator, and MIT Professor Michael Strano adds, "This is a hugely exciting development, as, for the first time, we have developed a nanobionic sensor that can detect arsenic — a serious environmental contaminant and potential public health threat. With its myriad advantages over older methods of arsenic detection, this novel sensor could be a game-changer, as it is not only more time-efficient, but also more accurate and easier to deploy than older methods. It will also help plant scientists in organizations such as TLL to further produce crops that resist uptake of toxic elements. Inspired by TLL's recent efforts to create rice crops which take up less arsenic, this work is a parallel effort to further support SMART DiSTAP's efforts in food security research, constantly innovating and developing new technological capabilities to improve Singapore's food quality and safety."
Source and top image: MIT