Using Liquid Metal to Turn Motion into Electricity - Even Underwater 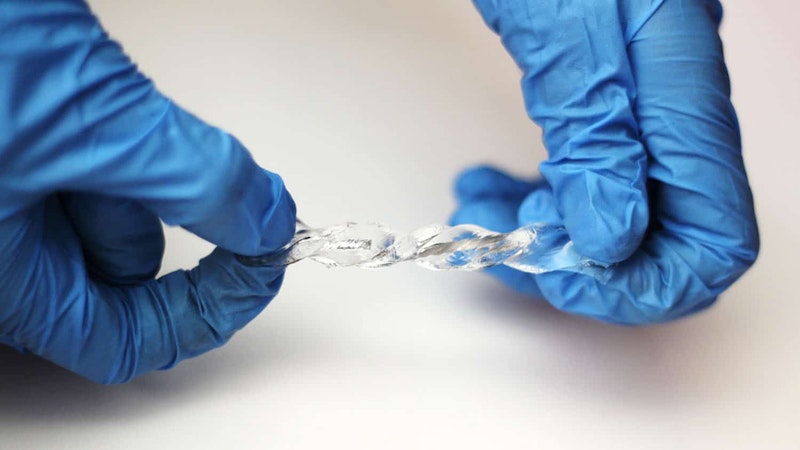 Researchers at North Carolina State University have created a soft and stretchable device that converts movement into electricity and can work in wet environments.
"Mechanical energy - such as the kinetic energy of wind, waves, body movement and vibrations from motors - is abundant," says Michael Dickey, corresponding author of a paper on the work and Camille & Henry Dreyfus Professor of Chemical and Biomolecular Engineering at NC State. "We have created a device that can turn this type of mechanical motion into electricity. And one of its remarkable attributes is that it works perfectly well underwater."
The heart of the energy harvester is a liquid metal alloy of gallium and indium. The alloy is encased in a hydrogel - a soft, elastic polymer swollen with water. The water in the hydrogel contains dissolved salts called ions. The ions assemble at the surface of the metal, which can induce charge in the metal. Increasing the area of the metal provides more surface to attract charge. This generates electricity, which is captured by a wire attached to the device. For further information see the IDTechEx report on Energy Harvesting Microwatt to Gigawatt: Opportunities 2020-2040.
"Since the device is soft, any mechanical motion can cause it to deform, including squishing, stretching and twisting," Dickey says. "This makes it versatile for harvesting mechanical energy. For example, the hydrogel is elastic enough to be stretched to five times its original length."
In experiments, researchers found that deforming the device by only a few millimeters generates a power density of approximately 0.5 mW m-2. This amount of electricity is comparable to several popular classes of energy harvesting technologies.
"However, other technologies don't work well, if at all, in wet environments," Dickey says. "This unique feature may enable applications from biomedical settings to athletic wear to marine environments. Plus, the device is simple to make. There is a path to increase the power, so we consider the work we described here a proof-of-concept demonstration."
The researchers already have two related projects under way. One project is aimed at using the technology to power wearable devices by increasing the harvester's power output. The second project evaluates how this technology could be used to harvest wave power from the ocean.
Source and top image: North Carolina State University