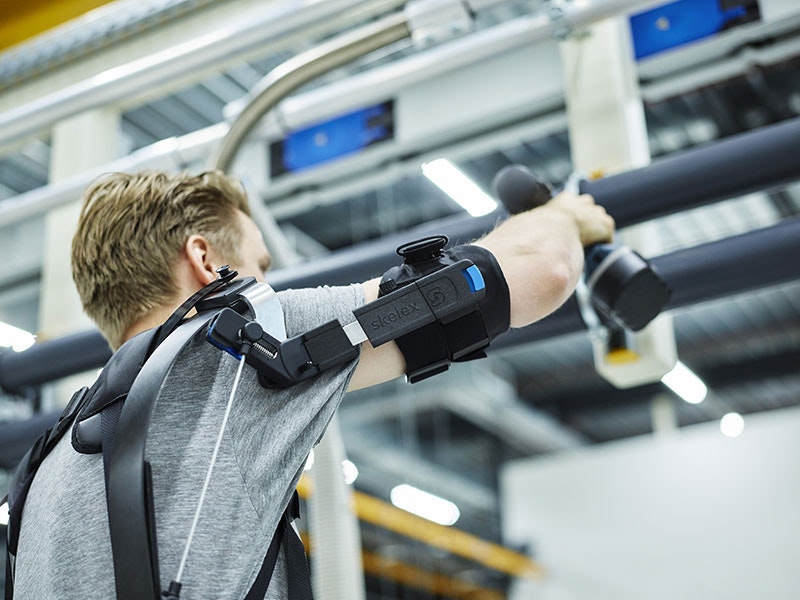 In manufacturing, work-related lower-back injuries from lifting and handling heavy objects account for approximately $100 billion in medical bills annually in the United States, according to data from the Bureau of Labor Statistics. Although novel ergonomic interventions such as industrial exoskeletons have shown promise in reducing the risk of musculoskeletal injuries, new research finds that the cognitive fit (where the wearer has ample mental resources available to accurately operate the exoskeleton while conducting their daily work tasks) of such wearable robotic solutions in the workplace may impose newer risks on workers.
These findings address some of the critical concerns by the National Institute of Occupational Safety and Health (NIOSH) on occupational robotics. Researchers at Texas A&M University and The Ohio State University have determined that increased cognitive demands in the workplace, often associated with new technologies or automation, can offset the mechanical advantages of wearing a low-back exoskeleton, a wearable device that is aimed to reduce or redistribute biomechanical spine loading associated with heavy manual work. These findings are published in the latest issue of Applied Ergonomics.
The research team includes Ranjana Mehta, associate professor in the Wm Michael Barnes '64 Department of Industrial and Systems Engineering and director of the NeuroErgonomics Laboratory; Yibo Zhu, graduate student in industrial and systems engineering and member of the neuroergonomics laboratory; Eric Weston, graduate research associate in industrial systems engineering at The Ohio State University; and William Marras, professor of integrated systems engineering, neurological surgery, orthopedics, and physical medicine and rehabilitation at the Spine Research Institute at The Ohio State University.
"This is the first study looking into the brain as a user was performing a lifting task wearing a back exoskeleton," Mehta said. "We were able to document the neurocognitive 'cost' of wearing an exoskeleton and identify adaptation strategies adopted by users over time to mitigate the cognitive risks introduced by the exoskeleton. We were also able to demonstrate the utility of using ambulatory brain imaging and connectivity analysis during this highly movement-oriented physical task."
The team recruited healthy adults, both men and women with no history of lower back injuries, to participate in the study that required extensive lifting, both with and without the help of a low back exoskeleton. For further information see the IDTechEx report on Wearable Technology Forecasts 2021-2031.
Participants attended two sessions, one session focused on performing the lifting tasks while wearing an exoskeleton and another session without the exoskeleton. Each participant was fitted with a mechanical exoskeleton attached to their chest and legs while they repeatedly lifted a medicine ball for 30 minutes. After a similar amount of rest break, they were then asked to perform the same task with the help of an exoskeleton but were also asked to simultaneously perform a mental task: subtract 13 from a number between 500 and 1,000 each time they lifted the ball.
These tasks allowed the researchers to measure spinal load using advanced EMG (electromyographic)-assisted biomechanical modeling and monitor functional brain activation during the task using an ambulatory brain imaging device called functional near-infrared spectroscopy. Integrating traditional biomechanical/ergonomics and ambulatory neuroimaging techniques allowed them to assess the neuroergonomic fit of human-exoskeleton interaction.
The results show that the exoskeleton did not significantly reduce spinal compression loads and had a marginal practical benefit in reducing spine shear loads, compared to not wearing an exoskeleton. However, the "cost" of wearing the exoskeleton was captured via the neuroergonomic assessment. Compared to the no exoskeleton condition, the use of exoskeletons during lifting recruited additional regions of the brain that are typically involved in regulating alertness and vigilance. The study also found that when each individual was tasked with solving a math problem to accompany the lifts, to simulate external cognitive demands on workers, they lost whatever biomechanical benefits were offered by the exoskeleton in the first place.
"Cognitive demands have been shown to exacerbate spinal loading during lifting. That these demands completely offset the small mechanical advantage of the exoskeleton is a remarkable finding of the study," Mehta said. "We wanted to shed some light on how the use of an industrial exoskeleton impacts the worker's motor and cognitive capabilities, given that the worker has to learn new motor strategies to work efficiently while wearing exoskeletons to do their work. A neuroergonomics approach, i.e., evaluating brain-behavior relationships at work, was able to capture cognitive risks of exoskeletons that traditional ergonomics and biomechanical measures were not able to."
The data concludes that an increase in an individual's cognitive response to tasks will hinder, and even cancel out, the benefits that are associated with wearing an exoskeleton.
"We wanted to document how the brain processes human-exoskeleton interaction to identify potential training strategies that can be utilized to minimize the cognitive risks and support faster motor adaptation strategies," Mehta said. "While exoskeletons hold great promise in alleviating physical loads in the workplace, these findings can guide the development of decision support tools for ergonomists to determine when/how and during what tasks exoskeletons should be used on the factory floor to maximize worker safety."
Source: Texas A&M University
Top image: Bionic Lift SKELEX 360-XFR EXOSKELETON