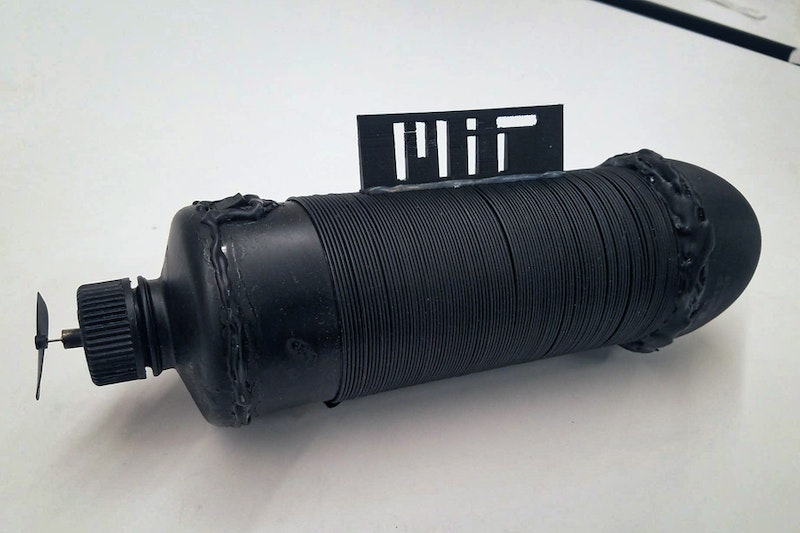 Researchers have developed a rechargeable lithium-ion battery in the form of an ultra-long fiber that could be woven into fabrics. The battery could enable a wide variety of wearable electronic devices, and might even be used to make 3D-printed batteries in virtually any shape.The researchers envision new possibilities for self-powered communications, sensing, and computational devices that could be worn like ordinary clothing, as well as devices whose batteries could also double as structural parts.
In a proof of concept, the team behind the new battery technology has produced the world's longest flexible fiber battery, 140 meters long, to demonstrate that the material can be manufactured to arbitrarily long lengths. The work is described today in the journal Materials Today. MIT postdoc Tural Khudiyev (now an assistant professor at National University of Singapore), former MIT postdoc Jung Tae Lee (now a professor at Kyung Hee University), and Benjamin Grena SM '13, PhD '17 (currently at Apple) are the lead authors on the paper. Other co-authors are MIT professors Yoel Fink, Ju Li, and John Joannopoulos, and seven others at MIT and elsewhere.
Researchers, including members of this team, have previously demonstrated fibers that contain a wide variety of electronic components, including light emitting diodes (LEDs), photosensors, communications, and digital systems. Many of these are weavable and washable, making them practical for use in wearable products, but all have so far relied on an external power source. Now, this fiber battery, which is also weavable and washable, could enable such devices to be completely self-contained. For further information see the IDTechEx report on Flexible, Printed and Thin Film Batteries 2020-2030: Technologies, Markets and Players.
The new fiber battery is manufactured using novel battery gels and a standard fiber-drawing system that starts with a larger cylinder containing all the components and then heats it to just below its melting point. The material is drawn through a narrow opening to compress all the parts to a fraction of their original diameter, while maintaining all the original arrangement of parts.
While others have attempted to make batteries in fiber form, Khudiyev says, those were structured with key materials on the outside of the fiber, whereas this system embeds the lithium and other materials inside the fiber, with a protective outside coating, thus directly making this version stable and waterproof. This is the first demonstration of sub-kilometer long fiber battery which is both sufficiently long and highly durable to have practical applications, he says.
The fact that they were able to make a 140-meter fiber battery shows that "there's no obvious upper limit to the length. We could definitely do a kilometer-scale length," he says. A demonstration device using the new fiber battery incorporated a "Li-Fi" communications system — one in which pulses of light are used to transmit data, and included a microphone, pre-amp, transistor, and diodes to establish an optical data link between two woven fabric devices.
"When we embed the active materials inside the fiber, that means sensitive battery components already have a good sealing," Khudiyev says, "and all the active materials are very well-integrated, so they don't change their position" during the drawing process. In addition, the resulting fiber battery is much thinner and more flexible yielding an aspect ratio, that is the length-to-width fraction, up to a million, which is way beyond other designs, which makes it practical to use standard weaving equipment to create fabrics that incorporate the batteries as well as electronic systems.
The 140-meter fiber produced so far has an energy storage capacity of 123 milliamp-hours, which can charge smartwatches or phones, he says. The fiber device is only a few hundred microns in thickness, thinner than any previous attempts to produce batteries in fiber form.
"The beauty of our approach is that we can embed multiple devices in an individual fiber, " Lee says, "unlike other approaches which need integration of multiple fiber devices." They demonstrated integration of LED and Li-ion battery in a single fiber and he believes more than three or four devices can be combined in such a small space in the future. "When we integrate these fibers containing multi-devices, the aggregate will advance the realization of a compact fabric computer."
In addition to individual one-dimensional fibers, which can be woven to produce two-dimensional fabrics, the material can also be used in 3D printing or custom-shape systems to create solid objects, such as casings that could provide both the structure of a device and its power source. To demonstrate this capability, a toy submarine was wrapped with the battery fiber to provide it with power. Incorporating the power source into the structure of such devices could lower the overall weight and so improve the efficiency and range they can achieve.
"This is the first 3D printing of a fiber battery device," Khudiyev says. "If you want to make complex objects" through 3D printing that incorporate a battery device, he says, this is the first system that can achieve that. "After printing, you do not need to add anything else, because everything is already inside the fiber, all the metals, all the active materials. It's just a one-step printing. That's a first."
That means that now, he says, "Computational units can be put inside everyday objects, including Li-Fi."
The team has already applied for a patent on the process and continues to develop further improvements in power capacity and variations on the materials used to improve efficiency. Khudiyev says such fiber batteries could be ready for use in commercial products within a few years.
Source and top image: MIT