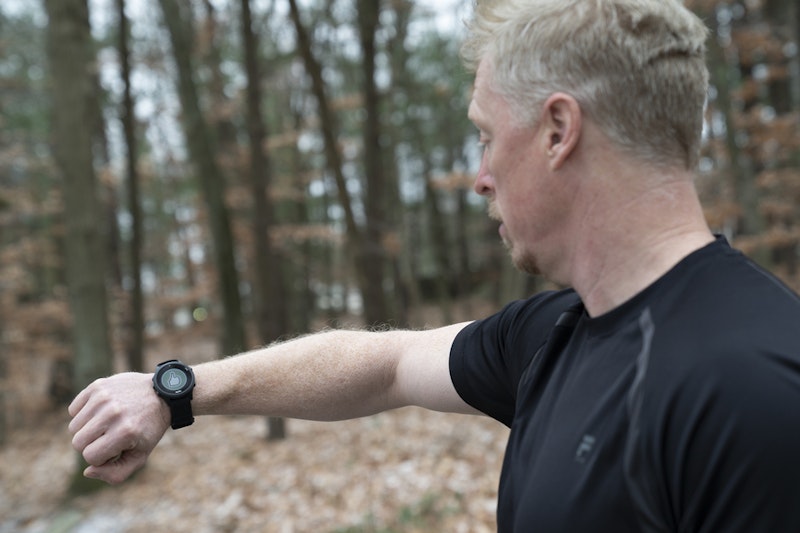 In 2020, more than 2,000 US service members experienced heat stroke or heat exhaustion. Such injuries pose a "significant and persistent threat to both the health of US military members and the effectiveness of military operations," according to a recent military health report. Young or inexperienced recruits are especially vulnerable.
A new device from MIT Lincoln Laboratory can now alert trainees when they are heading toward injury. The device continuously estimates a person's core body temperature to determine their risk level for heat strain as they train. This risk is communicated on a smartwatch display, providing early warning to its wearer.
"Heat injury is a preventable injury if you know how to look for it," says James Balcius, who leads the program. A biomedical researcher in the Human Health and Performance Systems Group, Balcius joined Lincoln Laboratory following 30 years of military service. "The services have these injuries in the hundreds each year, and annually a number of service members have died from this. Trainers and medics could benefit from tools that provide a warning of an impending heat casualty. That's why we're developing this technology."
The system is made up of a few components. First, an armband sensor measures the trainee's heart rate. Those heart rate data are sent via Bluetooth to a smartwatch. Installed on the watch, a Lincoln Laboratory-developed app runs an algorithm that uses the data to estimate core body temperature. Depending on those results, the smartwatch will display a visual icon (a stop sign, danger sign, or thumbs up) with a colored background (red, yellow, or green) and emit an audible tone to alert users if they are overheating. For further information see the IDTechEx report on Wearable Sensors 2021-2031.
"It doesn't mean that everyone who goes into the red will get injured, but there's a higher probability that they will, so they need to take a break," Balcius says.
This technology was developed under the sponsorship of the US Army Medical Materiel Development Activity and in partnership with the US Army Research Institute of Environmental Medicine. In October, the technology was transitioned to the US Marine Corps Training and Education Command, who have so far fielded 170 prototypes at basic training sites. Feedback has been positive, with recommendations to enhance the capability. Tara Boettcher, also a researcher in the Human Health and Performance Systems Group, was key to coordinating logistics for device components, system assembly, and delivery to field sites.
"It was nice to get back in the field to see the device being tested, first at Parris Island and then in San Diego," Balcius says. It was also a reminder of how easily heat injuries can occur. "I remember our team was saying, 'Oh, well it's pretty balmy today,' and then we saw three heat cases in just that one day we were there."
The core body temperatures that the device monitors to determine a red, yellow, or green alert are set at "generally lower temperatures," Balcius says, appropriate for recruits who may not yet be acclimated to the demands of military training. In the future, this setting could be modified at the individual level. The algorithm this device uses to estimate core body temperature was developed by the US government in 2013. It has since been used in many commercial products. This device, however, is the first use of the algorithm in a form factor as small as a smartwatch.
Nancy DeLosa, a software developer and architect at the laboratory, wrote the code responsible for that successful integration. "We've taken the same concept and have used it in a lot of different form factors," says DeLosa. Similar heat strain technology that she developed software for over the past decade inspired this work, and helped this new device come together in less than a year. That prior technology, now in use by the military, is a more complex physiological monitoring system.
The appeal of this new device is its lightweight and low-cost (under $500). Using commercial equipment was key to meeting those requirements, though updates to the smartwatch's operating system and discontinuation of the armband heart rate monitor model threw last-minute curve balls to the program. Switching to the newer model that used two Bluetooth channels instead of one confused the system; DeLosa worked through these problems by making programming changes.
"It was an interesting experience taking COTS (commercial off-the-shelf) equipment and trying to make it do something that it was never designed to do," she adds.
Now that the program has come to an end, Balcius is pursuing ways to transition this capability beyond the military. Heat stress injuries are reported significantly in humanitarian aid and disaster relief organizations as well.
For Balcius, his personal experience makes preventing these injuries especially meaningful.
"In basic training, I had a heat injury. It's very personal for me to want to stop another person from having to go through that," he says. "It's why I served for so long, and its why I came to Lincoln Laboratory — to be part of the mission in a way that I am most useful. Heat injury may not be an injury that comes to mind when thinking of warfighters, but it persistently occurs every year across all the services and needs solving."
Source and top image: MIT