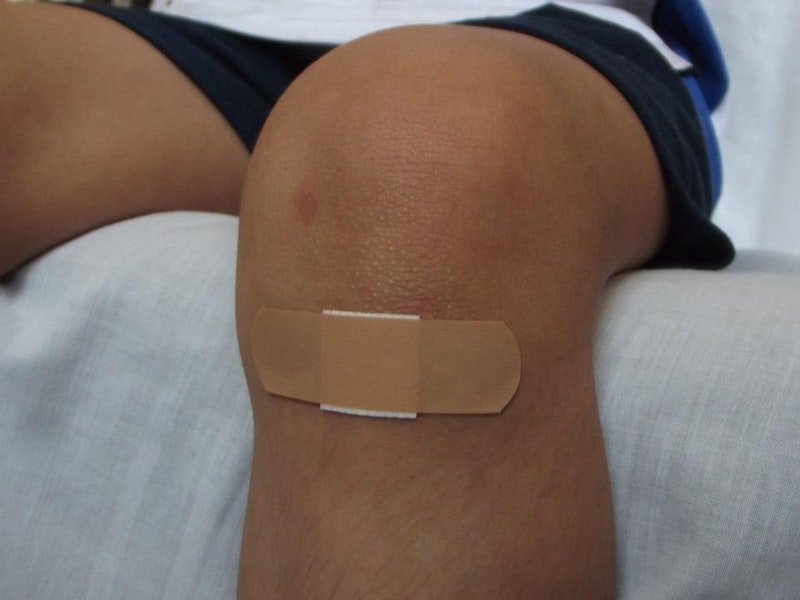 A bandage that releases medication as soon as an infection starts in a wound could treat injuries more efficiently. Empa researchers are currently working on polymer fibers that soften as soon as the environment heats up due to an infection, thereby releasing antimicrobial drugs.
It is not possible to tell from the outside whether a wound will heal without problems under the dressing or whether bacteria will penetrate the injured tissue and ignite an inflammation. To be on the safe side, disinfectant ointments or antibiotics are applied to the wound before the dressing is applied. However, these preventive measures are not necessary in every case. Thus, medications are wasted and wounds are over-treated. Even worse, the wasteful use of antibiotics promotes the emergence of multi-resistant germs, which are an immense problem in global healthcare. Empa researchers at the two Empa laboratories Biointerfaces and Biomimetic Membranes and Textiles in St. Gallen want to change this. They are developing a dressing that autonomously administers antibacterial drugs only when they are really needed.
The idea of the interdisciplinary team led by Qun Ren and Fei Pan: The dressing should be "loaded" with drugs and react to environmental stimuli. "In this way, wounds could be treated as needed at exactly the right moment," explains Fei Pan. As an environmental stimulus, the team chose a well-known effect: the rise in temperature in an infected, inflamed wound. For further information see the IDTechEx report on Advanced Wound Care Technologies 2020-2030.
Now the team had to design a material that would react appropriately to this increase in temperature. For this purpose, a skin-compatible polymer composite was developed made of several components: acrylic glass (polymethyl methacrylate, or PMMA), which is used, for example, for eyeglass lenses and in the textile industry, and Eudragit, a biocompatible polymer mixture that is used, for example, to coat pills. Electrospinning was used to process the polymer mixture into a fine membrane of nanofibers. Finally, octenidine was encapsulated in the nanofibers as a medically active component. Octenidine is a disinfectant that acts quickly against bacteria, fungi and some viruses. In healthcare, it can be used on the skin, on mucous membranes and for wound disinfection.

Signs of inflammation as triggers

As early as in the ancient world, the Greek physician Galen described the signs of inflammation. The five Latin terms are still valid today: dolor (pain), calor (heat), rubor (redness), tumor (swelling) and functio laesa (impaired function) stand for the classic indications of inflammation. In an infected skin wound, local warmth can be as high as five degrees. This temperature difference can be used as a trigger: Suitable materials change their consistency in this range and can release therapeutic substances.
"In order for the membrane to act as a "smart bandage" and actually release the disinfectant when the wound heats up due to an infection, we put together the polymer mixture of PMMA and Eudragit in such a way that we could adjust the glass transition temperature accordingly," says Fei Pan. This is the temperature, at which a polymer changes from a solid consistency to a rubbery, toughened state. Figuratively, the effect is often described in reverse: If you put a rubber glove in liquid nitrogen at -196 degrees, it changes its consistency and becomes so hard that you can shatter it like glass with one blow.
The desired glass transition temperature of the polymer membrane, on the other hand, was in the range of 37 degrees. When inflammation kicks in and the skin heats up above its normal temperature of 32 to 34 degrees, the polymer changes from its solid to a softer state. In laboratory experiments, the team observed the disinfectant being released from the polymer at 37 degrees - but not at 32 degrees. Another advantage: The process is reversible and can be repeated up to five times, as the process always "switches itself off" when it cools down. Following these promising initial tests, the Empa researchers now want to fine-tune the effect. Instead of a temperature range of four to five degrees, the smart bandage should already switch on and off at smaller temperature differences.

To investigate the efficacy of the nanofiber membranes against wound germs, further laboratory experiments are now in the pipeline. Team leader Qun Ren has long been concerned with germs that nestle in the interface between surfaces and the environment, such as on a skin wound. "In this biological setting, a kind of no man's land between the body and the dressing material, bacteria find a perfect biological niche," says the Empa researcher. Infectious agents such as staphylococci or Pseudomonas bacteria can cause severe wound healing disorders. It was precisely these wound germs that the team allowed to become acquainted with the smart dressing in the Petri dish. And indeed: The number of bacteria was reduced roughly 1000-fold when octenidine was released from the smart dressing.
"With octenidine, we have achieved a proof of principle for controlled drug release by an external stimulus," said Qun Ren. In future, she said, the technology could be applied to other types of drugs, increasing the efficiency and precision in their dosage.

Empa researchers are working in interdisciplinary teams on various approaches to improve medical wound treatment. For example, liquid sensors on the outside of the dressing are to make it visible when a wound is healing poorly by changing their color. Critical glucose and pH values serve as biomarkers.
To enable bacterial infections to be contained directly in the wound, the researchers are also working on a polymer foam loaded with anti-inflammatory substances and on a skin-friendly membrane made of plant material. The cellulose membrane is equipped with antimicrobial protein elements and kills bacteria extremely efficiently in laboratory tests.
Moreover, digitalization can achieve more economical and efficient dosages in wound care: Empa researchers are developing digital twins of the skin that allow control and prediction of the course of a therapy using real-time modeling.
Source: Empa
Top image: Pixabay