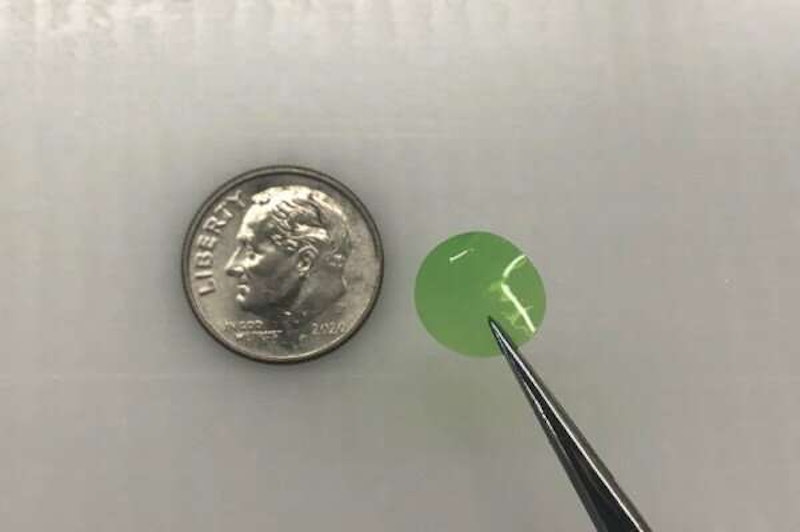 People get tattoos to memorialize an event or a person, to make a statement, or simply as an aesthetic embellishment. But imagine a tattoo that could be functional—telling you how much oxygen you are using when exercising, measuring your blood glucose level at any time of day, or monitoring a number of different blood components or exposure to environmental toxins. Now engineers at Tufts University have taken an important step toward making that happen with the invention of a silk-based material placed under the skin that glows brighter or dimmer under a lamp when exposed to different levels of oxygen in the blood. They reported their findings in the journal Advanced Functional Materials.
The novel sensor, which currently is limited to reading oxygen levels, is made up of a gel formed from the protein components of silk, called fibroin. The silk fibroin proteins have unique properties that make them especially compatible as an implantable material. When they are re-assembled into a gel or film, they can be adjusted to create a structure that lasts under the skin from a few weeks to over a year. When the silk does break down, it is compatible with the body and unlikely to invoke an immune response.
Substances in the blood such as glucose, lactate, electrolytes, and dissolved oxygen offer a window into the body's health and performance. In health-care settings, they are tracked by drawing blood or by patients being attached to bulky machines. Being able to continuously monitor their levels noninvasively in any setting could be a tremendous advantage when tracking certain conditions. For further information see the IDTechEx report on Diabetes Management Technologies 2022-2032: Markets, Players, and Forecasts.
Diabetics, for instance, have to draw blood to read glucose, often on a daily basis, to decide what to eat or when to take medication. By contrast, the vision mapped out by the Tufts team is to make monitoring much easier, literally by shining a light on a person's condition.
"Silk provides a remarkable confluence of many great properties," said David Kaplan, Stern Family Professor of Engineering in the School of Engineering and lead investigator of the study. "We can form it into films, sponges, gels and more. Not only is it biocompatible, but it can hold additives without changing their chemistry, and these additives can have sensing capabilities that detect molecules in their environment. The oxygen sensor is a proof of concept for a range of sensors we could create."
The chemistry of the silk proteins makes it easier for them to pick up and hold additives without changing their properties. To create the oxygen sensor, the researchers used an additive called PdBMAP, which glows when exposed to light of a certain wavelength. That glow has an intensity and duration proportional to the level of oxygen in the environment.
The silk gel is permeable to the fluids around it, so the PdBMAP "sees" the same oxygen levels in the surrounding blood. PdBMAP is also useful because it glows, or phosphoresces, when exposed to light that can penetrate the skin. Other sensor candidates may only respond to wavelengths of light that cannot penetrate the skin.
The researchers rely more on the "duration" component of phosphorescence to quantify oxygen levels, because intensity of the glow can vary with the depth and size of the implant, skin color, and other factors. The duration of the glow decreases as levels of oxygen increase.
In experiments, the implanted sensor detected oxygen levels in animal models in real-time, and accurately tracked high, low, and normal levels of oxygen. The importance of being able to track oxygen levels in patients has grown in public awareness with the COVID-19 pandemic, in which patients had to be admitted for hospital treatment when their oxygen levels became critically low.
"We can envision many scenarios in which a tattoo-like sensor under the skin can be useful," said Thomas Falcucci, a graduate student in Kaplan's lab who developed the tattoo sensor. "That's usually in situations where someone with a chronic condition needs to be monitored over a long period of time outside of a traditional clinical setting. We could potentially track multiple blood components using a sensor array under the skin."
The tattoo-like sensors are the latest in a growing portfolio of potential medical products derived from silk protein in Kaplan's lab, from orthopedic implants to scaffolding for creating new tissue in the heart and bones.
Source and top image: Tufts University