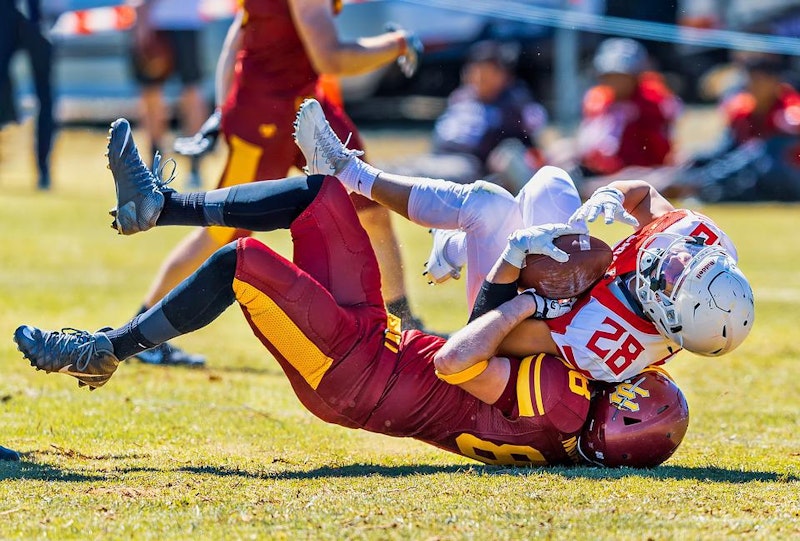 Sensors used to detect head impacts in athletes who play high-impact sports like football traditionally have been placed inside their helmets, which can lead to false or incomplete readings. Michigan State University researchers have created a thin sensor that instead can be worn on an athlete's neck to identify concussion injuries.
Each year, 20% of the estimated 1.7 million concussions are sports-related, according to the Centers for Disease Control and Prevention. While watching a football game between MSU and the University of Michigan, Nelson Sepúlveda, a professor in the College of Engineering, was struck with inspiration.
"I was sitting close to the field and was watching the hard hits those players withstand," Sepúlveda said. "I thought, these guys need to be protected, and there must be a better way to measure how hard the impact is to detect concussions."
Sepúlveda and Henry Dsouza, his graduate student, developed a thin ferroelectric nano generator sensor that is about 0.1 millimeter thick, and is about the size of a bandage. When the sensor is pulled or pressed, an electrical charge is created that is transmitted to a computer. The idea is that athletes would wear the "bandage" sensors on their necks throughout games or practices. When a collision that could cause a concussion happens, the medical team would receive an alert on a sideline computer to take the player off the field and do further tests. For further information see the IDTechEx report on Wearable Sensors 2021-2031.
To test the accuracy of the "bandage" sensor, a crash-test dummy's head was equipped with accelerometers inside the head and "bandage" sensors on the front, back, right and left sides of its neck. The head was dropped about two feet, and the data from inside the helmet was compared to the data from the "bandage" sensor on the dummy's neck to determine whether the athlete experienced a concussion. The "bandage" sensor accurately measured the whiplash motion of the neck as being consistent with concussion injuries.
"I really thought the sensor had to be on the head," Sepúlveda said. "I was surprised to learn from the experiences and my students that we could tell there was a concussion to the head by the way the neck moved."
Sepúlveda, Dsouza and their team at MSU would like to streamline the design of the bandage sensor by using a wireless transmitter. The researchers also hope to see the technology in use in the future for football and ice hockey players from youth leagues up through professional sports teams.
Source: Michigan State University
Top image: Pixabay