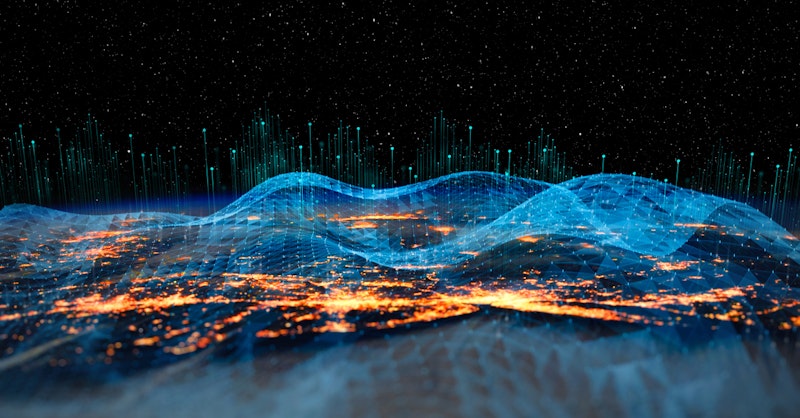 The new IDTechEx report, "Sensors 2021-2041" uniquely analyses the whole subject in the light of such seismic changes as the COVID-19 virus. The sensor business is in turmoil. The industries that spend most on sensors are changing as are the sensors. Fossil fuel production, internal combustion engines and power stations will eventually decline but they need more sensors in the meantime. Existing Sensors become commoditized but new ones such as LIDAR are extremely expensive. More sensors in smart watches and phones, Internet of Things nodes, cars and medical wearables but some of those industries peaking. More sensors will make large batteries and aircraft safer. Hold on for a wild ride in this large business as it grows rapidly overall.
Understand automotive entering a perfect storm of change with car companies fighting for survival with cost and range of electric cars, buses and trucks taking priority over autonomy as things go short term in a battle for survival. That means different sensors. The report targets commercial opportunities. Understand the diabetes epidemic with continuous glucose monitoring becoming viable for 500 million diabetics.
What comes next, including future winners, is revealed by interviews, trends in technology and patenting in a unique overview of the whole subject. There are over 80 new patent trend graphs for different sensor families with top assignee listings for each in order of activity and explanation of what they tell us. The 13 most important sensor families for the future get particularly detailed technical and business analysis including insights from new IDTechEx reports on key aspects such as automotive RADAR and LIDAR, biosensors, printed and flexible sensors.
The report has an executive summary and conclusions for those with limited time. New infograms present facts-based analysis by PhD level, multi-lingual analysts based on 20 years of ongoing research. See 14 key conclusions that result. Compare $ billion value market forecasts 2021-2041 for nine sensor-rich industries with market drivers. See backup forecasts including the important new IDTechEx figures for post-COVID car sales to 2040. Infograms reveal how the market sizes compare and overlap. An example is the market for wearable technology overall and its part for medical purposes down to biosensors within that. Only IDTechEx gives you the big picture.
Sensors are discussed in detail by industry, operating principle and parameter measured. There are technology comparisons. Manufacturers are identified, including which are filing the most patents. The 16 most-patented sensor families by parameter are compared. From interviews, data gathering and other sources, the level of interest and market forecasts are given by key sector. Learn wired vs wireless sensor interest. 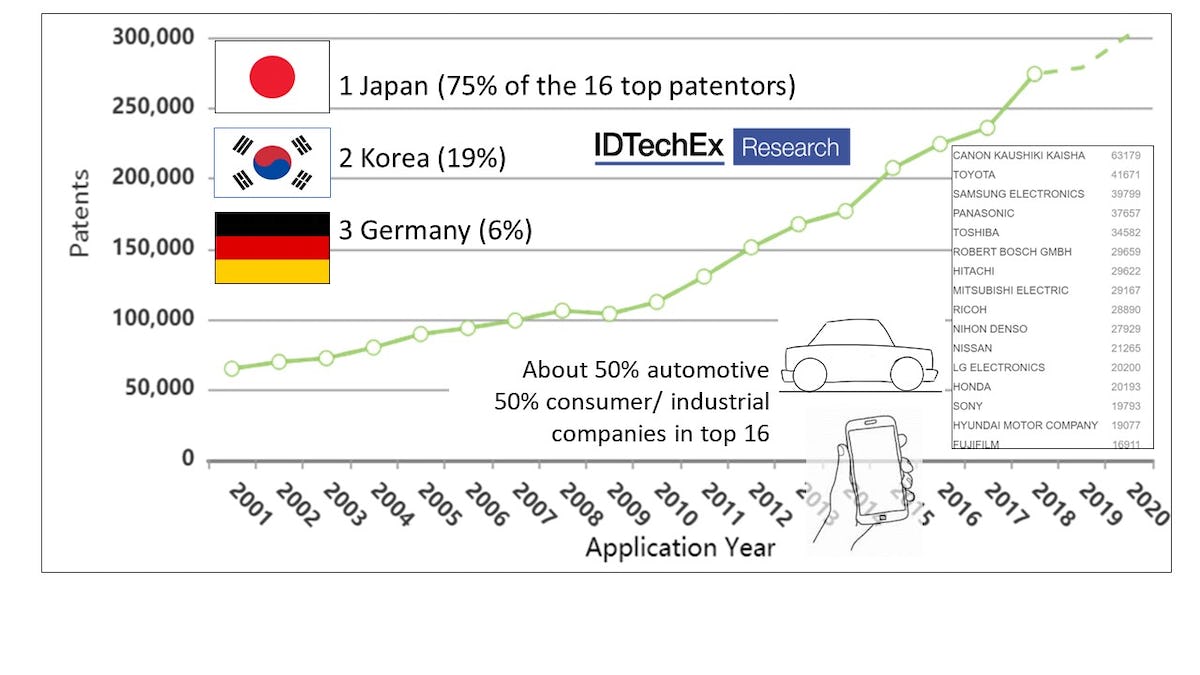 Sensor total patents by year and top 16 patentors. Source: IDTechEx Research, "Sensors 2021-2041"
The report introduction illustrates a host of sensor examples explaining Internet of Things, body area networks, aircraft challenges and autonomous vehicle sensors. The trend to printing and wearable are here with an explanation of sensor fusion and newly monitored interest levels in sensors, including China.
Chapter three is an analysis by business sector: patents, technology, players, and trends. The products, needs and thrust of nine key industries identified are here. They are aerospace, agricultural, automotive, consumer, energy, environmental, industrial (including manufacturing, logistics, Internet of Things), medical and wellness, mining.
Chapter four does that for 25 sensor operating principles with an extended analysis of the most important ones. For example, here is an explanation of the new biosensors, lab-on-a-chip, piezotronics and thermoelectric sensing and where they are headed and particular attention on the newly- important vehicle RADAR and LIDAR sensor technologies leveraged by ultrasound.
Finally, Chapter 5, the longest, is a thorough sensor analysis by parameter measured: patents, technology, manufacturers, and trends including newly important medical/ wellness. No less than 54 sensor families are examined, from emerging continuous glucose monitoring with massive patenting to gas, nerve, new structural health monitoring and toxigen sensing. Who is behind massive new patenting of temperature sensors and why? Have the new terahertz radiation sensors got a future? The approach is balanced, recognizing, for example that a solar panel replacing three things - deep oil and gas drilling, delivery pipelines and power stations - means fewer sensors and COVID-19 has de-prioritized car autonomy. Huge market growth prospects and identified gaps in the sensor market are presented in the context of negatives identified in new facts-based analysis.
For more information on this report, please visit www.IDTechEx.com/Sensors or for related research available from IDTechEx please visit www.IDTechEx.com/Research .
IDTechEx guides your strategic business decisions through its Research, Consultancy and Event products, helping you profit from emerging technologies. For more information on IDTechEx Research and Consultancy, contact research@IDTechEx.com or visit www.IDTechEx.com.