Augmented and Virtual Reality: Technology of the Future, Today 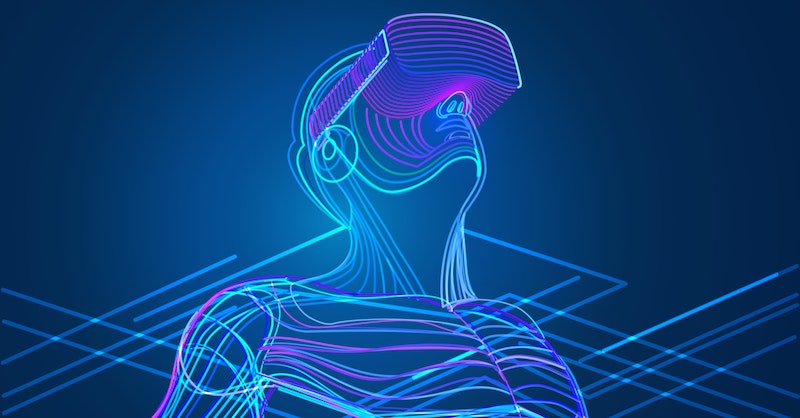 By 2030, IDTechEx predicts the augmented, virtual and mixed reality market to be over $30Bn. With COVID limiting physical interaction, virtual communication and interaction will be the normal for many years to come. Although seen as futuristic by some, augmented, virtual and mixed reality devices have shown that they have an important part to play in many different industries. They are truly the technology of the future, today.
Through deep analysis of both key players and technologies, IDTechEx's most recent report on Augmented and Virtual Reality, "Augmented, Mixed and Virtual Reality 2020-2030: Forecasts, Markets and Technologies", can provide you with the trends this market will face in the coming decade. This article distills the key aspects of the report.
What Are Augmented, Virtual, and Mixed Reality?
The basic definition of these terms are as follows:
Virtual, augmented and mixed reality products have continued to receive high levels of funding and investment during the 2010 decade. There has also been immense hype over these products during the decade, with evangelists of the technology believing that it will be used in all aspects of day to day life. Some examples of these products can be seen below.

Source: IDTechEx Research, "Augmented, Mixed and Virtual Reality 2020-2030: Forecasts, Markets and Technologies"
Where Has This Industry Come From?
Over the past two decades, there have been big strides in the technological development of XR products. In the early 90's a number of headsets were released which allowed the user to view a video on a headset from an external device. Then in the next decade, devices such as the google glass explorer were released. These captured the imagination of many people, and it was one of the first "augmented reality" products available to consumers. Although this did not take off, it paved the way for other products to be developed. Later in the decade, more VR and AR products were released, for example in 2019, Magic Leap released its first product after years of funding. Oculus also released a VR headset which does not need to be connected to a computer - the Quest - proving that VR does not need to be tethered to a computer.

Source: IDTechEx Research, "Augmented, Mixed and Virtual Reality 2020-2030: Forecasts, Markets and Technologies"
What Are the Key Technologies?
A headset is made up of many component parts, including optics, displays, sensors and haptics. Each of these component parts must fit together seamlessly to create a completely immersive experience for the user. Within optics, waveguides are an important part of augmented and mixed reality displays, transmitting the image from the display to the user's eye. There are many different requirements which must be fulfilled, and although currently there are optical artifacts present in some headsets, it is likely in the future that these will be removed as the technology evolves and improves.
What Industries Are Using This Technology?
There are a broad range of use cases and industries using augmented, mixed, and virtual reality technology. For example, manufacturing, remote assistance, education, and training, to name but a few. These applications are used in many different industries. Two common use cases are discussed.
One of the most well-known uses of VR headsets is in gaming applications. Companies such as Oculus, HTC, and Sony, have created a range of products which consumers can use for a total immersive gamine experience. However, there are also other applications for XR products such as remote assistance and training. The IDTechEx report, "Augmented, Mixed and Virtual Reality 2020-2030: Forecasts, Markets and Technologies", includes analysis of many key leaders in the AR, VR and MR fields, and provides you with a deeper understanding for the various applications for such products.
AR and MR products are being used to solve the "Skills Gap" problem. This problem occurs when skilled workers retire, and with them their skilled knowledge they have gained. This knowledge needs to be transferred to new workers. The skilled workers can record workflows and processes which the new employees can follow in a safe hands-free environment. Furthermore, they can annotate the real world with technical specifications to aid the worker. Some companies, such as Vuzix, use their own products on their assembly floors
What Is the Impact of COVID-19?
Recently the versatility of mixed and augmented reality products has come to the forefront of the news, with an Imperial led project at the Imperial College Healthcare NHS Trust. Doctors have been wearing the Microsoft Hololens headsets whilst working on the front lines of the COVID pandemic, to aid them in their care for their patients.
The use case for this project allows other clinicians to sit in another room, and by using Microsoft Teams, see a live video feed of the doctor who is treating the COVID-19 patients. This is utilizing the remote assistance aspects which have been previously used by Hololens users for manufacturing, maintenance, and other similar applications. By using the devices, staff reduced the amount of time they must spend in a high-risk area by 83%. Not only this, they are using less PPE, as fewer clinicians are in the room during patient care.
COVID has put the spotlight on this hands-free, interactive technology, and it is unlikely that this focus will move for some time. There will be a need for this technology in many new use cases, which previously did not require hands-free, or remote capabilities.
What Will I Learn From the Report?
"Augmented, Mixed and Virtual Reality 2020-2030: Forecasts, Markets and Technologies" covers one of the key markets of the future: the AR/VR/MR market. VR, MR and AR are products are used in many different settings, for example for day-to-day workflow management and on production lines. This market, which IDTechEx forecasts' predict to be over $30Bn by 2030, will impact many different industries, and future innovations will continue its growth in the wearables market. The report reviews and analyses over 100 products and details of over 80 companies, to create succinct and detailed conclusions about the future of this market.
The report includes market forecasts, player profiles, investments, and comprehensive company lists are all provided. It is an essential read for those looking for a deep understanding of the AR/VR/MR markets.
For a complete overview of this industry, please refer to the IDTechEx report, "Augmented, Mixed and Virtual Reality 2020-2030: Forecasts, Markets and Technologies", please visit www.IDTechEx.com/ARVR. This report falls within the Wearables portfolio, which covers haptics, wearables, hearables, and other similar devices.