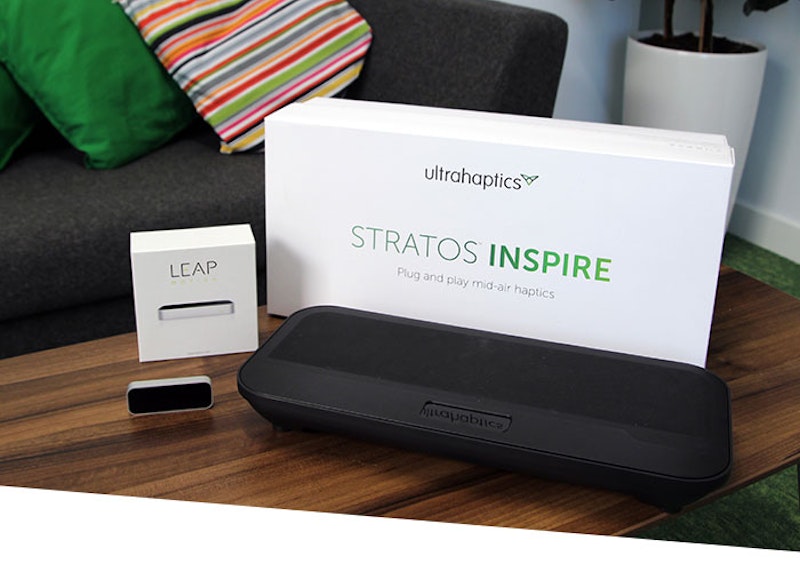 Ultrahaptics announced the acquisition of Leap Motion on May 30th 2019, for a reported $30m. This brings Leap Motion's prominent and popular hand tracking technique alongside Ultrahaptics' contactless haptic feedback technique. The two technologies have inherent synergy, with the haptic feedback systems capable of being configured based on hand tracking for the user.
Ultrahaptics remain a unique pioneer in contactless haptics, using arrays of ultrasound transducers to create physical sensations in the air which can be felt by the user. Whilst other companies and research groups have demonstrated versions contactless haptic feedback, Ultrahaptics have raised the money and deployed projects on a scale which is unmatched in this technology area. This includes many products around user interfaces in the context of virtual and augmented reality, but also in casino gaming, theme park experiences, and other diverse projects.
Leap Motion are in a position where they face more immediate competition, with several companies (both large and small) offering technology for hand and gesture tracking in the context of virtual and augmented reality. However, Leap Motion's options were particularly prominent and widely adopted, thanks to an accessible SDK alongside cheap, accessible and flexible hardware options. Leap Motion had previously been value at over $300m, albeit at the peak of the hype in the VR/AR space, including reported approaches from Apple and interest from other large players.
It remains early days in the market for virtual reality products. Whilst the market now sees millions of products sold each year, it has certainly not taken off to the degree that many analysts and companies predicted. The deal between Ultrahaptics and Leap Motion sees the joining of two prominent technology companies offering important peripheral technology for products in this area. It is not likely to indicate any huge changes in the wider VR market, but does create a solid, consolidated technology company which can sit as a prominent partner and developer alongside the leading device makers and the wider community of developers and projects.
Information on both companies are included in IDTechEx's work covering Virtual, Augmented and Mixed Reality, and Ultrahaptics' technology and efforts are also described in detail in IDTechEx's report on haptics. For more information, see both report pages or email research@idtechex.com.
Learn more at the next leading event on the topic: Healthcare Sensor Innovations USA 2020